Did you know that your body gets only half the oxygen in extreme altitudes? And you need a lot of it when trying to reach exactly 5,359 meters above sea level, on rocky, crumbling roads, accompanied by icy winds that will try to knock you of the path any chance they get. Some time ago, we’ve stumbled upon Christoph Kluge – an athlete who submitted himself to such conditions voluntarily and created a strava record for climbing one of the highest rideable Himalayan passes on a bicycle in 2012. The Khardung La pass stood unchallenged since then. Until now.

Škoda together with its own We Love Cycling magazine, got curious, got competitive, and secretly spread the word out and soon enough cyclists without a proper regard for their wellbeing started flooding our inboxes. We’ve meticulously compared each applicant’s STRAVA records, overall athletic and health history, and their determination to give Kluge’s record run for its money. And, to our surprise, we ended up with not one nor two but four finalists, willing to undertake this extreme mission. And just like that the Catching Breath project was born.

Besides the four contestants, Bartosz Huzarski from Poland, Andrea Schilirò from Italy, Eva Lindskog from Sweden, and Valentí Sanjuan from Spain, we’ve found the shooting crew and a team to match the lunacy level of the whole adventure because Khardung La is the highest point of the Himalayas and, actually, of the whole world, accessible without military permission. So, after thorough preparations and with madman’s determination, we set out on the journey.

We wanted to keep the riders motivated by showing them how close/distant are they from Kluge’s original record so we deployed a Škoda KAROQ with a special paintjob, which was keeping Kluge’s pace and accompanied the riders on the road, serving as a reference.

Another support car was Škoda KODIAQ, also of the 4×4 family, which served as an assistant vehicle, carrying part of the camera crew, oxygen bottles, and all the gear necessary. It’s redundant to say that the race made all the cyclists hit their willpower rock bottom but it was challenging for the shooting crew as well. Hours of shooting “raw” and live, no storyboards, no retakes, and no ideal light conditions certainly don’t sound too tempting but, according to the director Alberto Accettulli, in the end it was hard to stop shooting because of the pure adrenaline rush and the stunning landscape! And most importantly, because he was witnessing one of the oldest stories there is – of a tooth-and-nail fight, of the human determination, and of overcoming one’s limits.

As with almost every race, there’s only one winner. Bartosz Huzarski not only managed to beat Khardung La but to also beat the old record by 27 minutes and 50 seconds. Shortly after that, Andrea Schilirò appeared from over the peak, also managing to best the record, and Eva Lindskog became a women’s record holder the moment she crossed the finish line just seconds before the KAROQ. 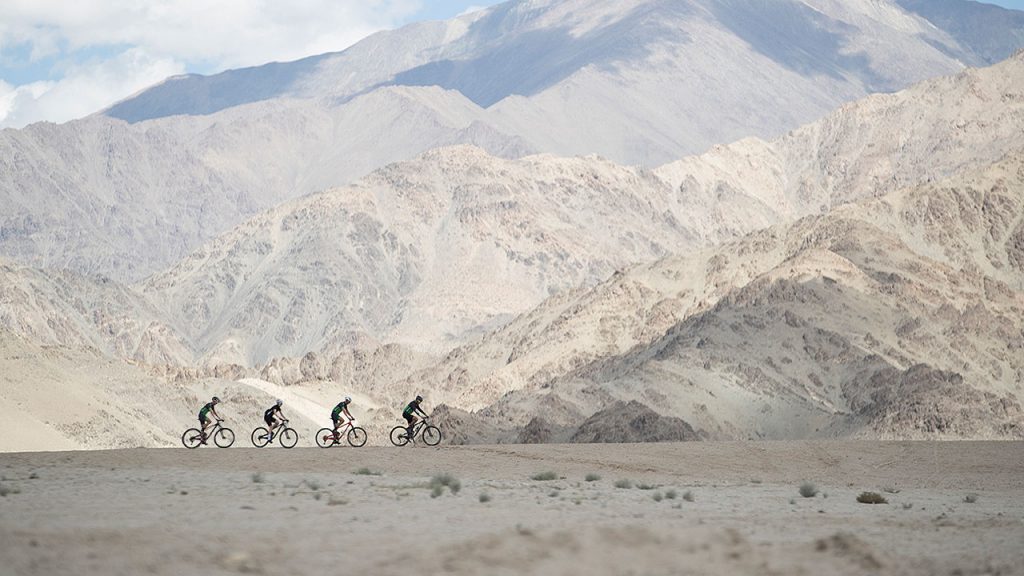 As for Valentí Sanjuan, even when the record was already off his limits because shortly before the challenge he took part in 10 Ironman races in 10 days (you read that correctly) and needed stay in a hospital after an injury, he decided to bite into it and not let the Himalayas win. After a short session with an oxygen mask and a decent amount of swearing, he too was greeted by the cheering crowds at the peak. After all contestants and the crew got their bearings, the excitement in the air was almost tangible. Needless to say the race was gruelling but absolutely worth it.

We would like to thank Garmin, Focus, The North Face, Mitas, and Hypoxie Group for supplying us with gear, invaluable advice, training opportunities and, most importantly, faith in our adrenaline-fuelled vision. But don’t think we’re going to rest on our laurels now, there’s might be already another adventure brewing.