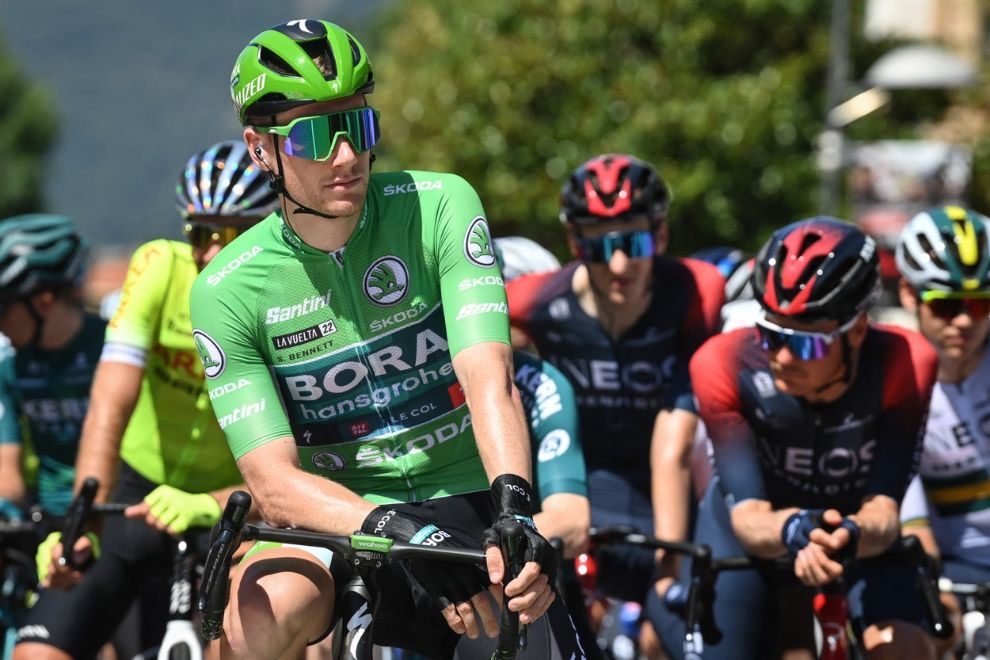 The first five stages of this year’s Vuelta a España have been enlightening and, with more than two weeks left in the race, we know a lot more than we did six days ago about who can win the coveted ŠKODA Green Jersey.

Sam Bennett of Bora-Hansgrohe easily won the first two mass sprint finishes, showing that he has fully recovered from the niggling injuries that kept him from finding his form. Based on these results, it would seem that he has the inside track for green. The 31-year-old Irishman has a proven track record as a sprinter, winning the ŠKODA Green Jersey in the 2020 Tour de France as well as winning green in several lesser multiple-stage races, such as the Tour of Turkey. And Bennett has one advantage over the other sprinters that cannot be underestimated, the best leadout rider in the world, Danny van Poppel. But there are only four more stages suited to mass sprints in the race, and it’s probably too much to expect Bennett to win them all, even with van Poppel. In addition, he still has to make it over the mountains within the prescribed time limit, which is far from certain.

On the other hand, his main rival, Mads Pedersen (Trek-Segafredo), is a pretty good climber, as he showed in stage 4 when he finished second on the uphill sprint to GC favourite Primož Roglič (Jumbo-Visma). There are plenty of hilly stages to come in which Pedersen is far more likely to pick up points than Bennett. Bennett currently leads Pedersen by only 9 points, 127 to 118. That’s not much. Assuming that both sprinters reach Madrid, I think Pedersen will likely have enough points to win the ŠKODA Green Jersey because of his greater versatility. Unless….

Unless Roglič manages to pick up enough points in the mountains to win green. He has won the Vuelta points classification twice before, but that was when the same number of points were awarded to the winner of mountain stages as in flat stages. The system has been changed and now resembles that of the Tour de France. This makes it a long shot for Roglič to win both red and green jerseys in this Vuelta, as he has done twice before. But if both Bennett and Pedersen don’t survive the mountains and are unable to finish the race, then the Slovenian (or whoever wins the GC) would have a good chance to win the double.

As for other sprinter candidates for green, the names of Pascal Ackerman (UAE Team Emirates) and Tim Merlier (Alpecin-Deceuninck) have often been cited.  But they both have only 34 points after stage 5 and have not shown that they have the legs or the teams to challenge the two favourites.

We want to mention here, because it is important, the narrow victory of Marc Soler, of UAE Emirates, after a splendid 30km solo breakaway in stage 5. It was the first Spanish Grand Tour stage win in nearly two years, a perplexing run of failure for a major cycling nation.