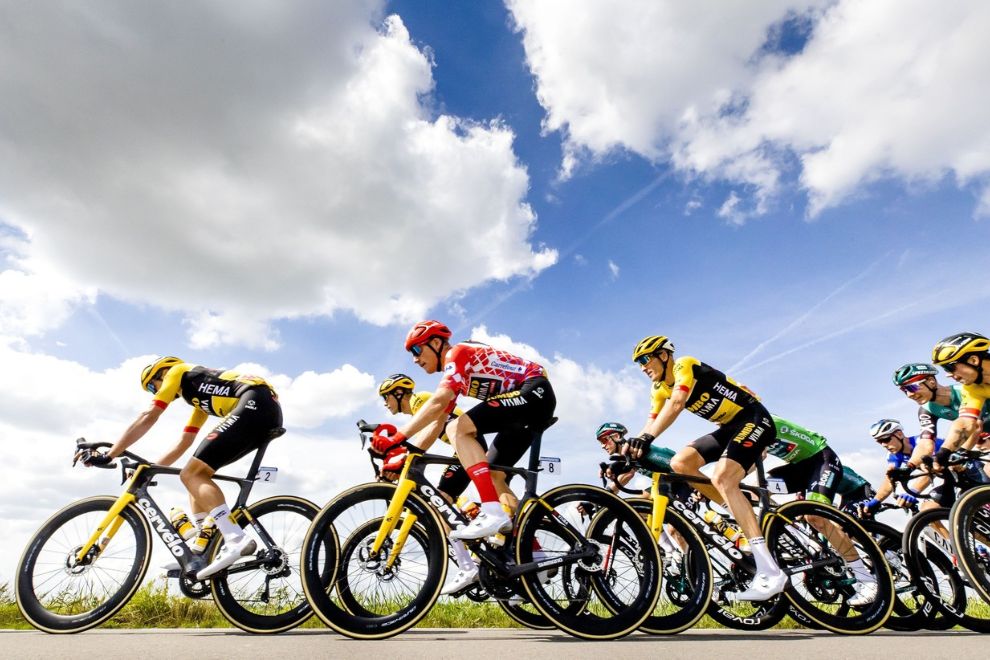 Cycling aficionados tend, much less than, say, football fans, to follow the exploits of individual cyclists, rather than teams. The reason is obvious: Football teams have community followings that don’t end when a fan moves to another city or country. A fan of the Chelsea football club will remain one even if he or she later lives in Paris or New York.

However, professional cycling teams are always named for their commercial sponsors, which inspires little loyalty. But they are country-based – for example, Jumbo-Visma is Dutch – which helps create a fan base. But I believe there are more followers of, say, Wout van Aert than of his team. Or that many fans follow Jumbo-Visma primarily because they are fans of of van Aert or 2022 Tour de France winner Jonas Vingegaard.

This is one reason that we will focus on the team today. The other, more important reason is that Jumbo-Visma is on an amazing roll. Vingegaard won the Tour de France yellow jersey; van Aert, the team’s super-domestique, won the Tour’s ŠKODA Green Jersey and the team won six stages. The recently completed Tour of Denmark was won by Jumbo-Visma’s Christophe Laporte. And the team won the stage 1 team time trial of the ongoing Vuelta a España, in which team leader Primož Roglič is shooting for his third consecutive GC victory. That’s quite a winning streak, and chances are good, barring accident or illness, that it will continue at least into September. Jumbo-Visma riders have held the maillot rojo (red jersey) for the first three Vuelta stages, with Italian Edoardo Affini set to wear it in Tuesday’s stage 4. And, frankly, there is little evidence that anyone can challenge Roglič for the GC victory.

🔴 Wow! This was a fantastic start to the Vuelta a España!

🔙 Take a look at the best photos and relive the first three stages of the Spanish grand tour in our home country.🇳🇱

Richard Carapaz, of Ineos Grenadiers, is an excellent rider who finished second in the 2020 Vuelta, to Roglič. And this may be his last race for Ineos, as he has signed up to ride for the US team EF Education-EasyPost next year. He will certainly wish to go out on a high note, but he hasn’t yet demonstrated that he can beat a rider of Roglič’s caliber in a Grand Tour. Other potential rivals already trail the Slovenian by significant margins. Frenchman Thibaud Pinot sits 39 secs behind after only three stages, and Australian Jai Hindley who won this year’s Giro, is 41seconds adrift. It will surely take an unusual event or a sudden lapse in form to keep the Jumbo-Visma juggernaut from capturing another Grand Tour.

The team known today as Jumbo-Visma was founded after the 1983 season as a result of the breakup of the TI-Raleigh team due to personal conflicts among the riders. Six of the TI-Raleigh riders were part of the new team, known as Kwantum–Decosol–Yoko, which would become Jumbo-Visma in 2019. Seven different sponsors lent their names to the team before it became Jumbo-Visma, the most important one being Rabobank. That sponsorship lasted from 1996 to 2012 and was responsible for the team’s first three Grand Tour victories, all by Denis Menchov, the Vuelta (2005 and 2007) and the Giro (2009). The team did not win another Grand Tour GC until Roglič won the 2019 Vuelta under Jumbo-Visma sponsorship. Under these colors, it has become the best road racing team in the world.

And sports director Merijn Zeeman is working hard to  ensure that the team’s dominance continues for a few years more. At the start of the Vuelta, Jumbo-Visma announced that it had signed two strong Dutch riders, Dylan van Baarle and Wilco Kelderman. Van Baarle won this year’s grueling Paris-Roubaix, while Kelderman finished third in the 2020 Giro and fifth in last year’s Tour de France.

Zeeman was of course delighted with the new signings, and noted that they would contribute to helping the team meet its competitive goals. “We aim for big prizes,” he said, as if we didn’t know.