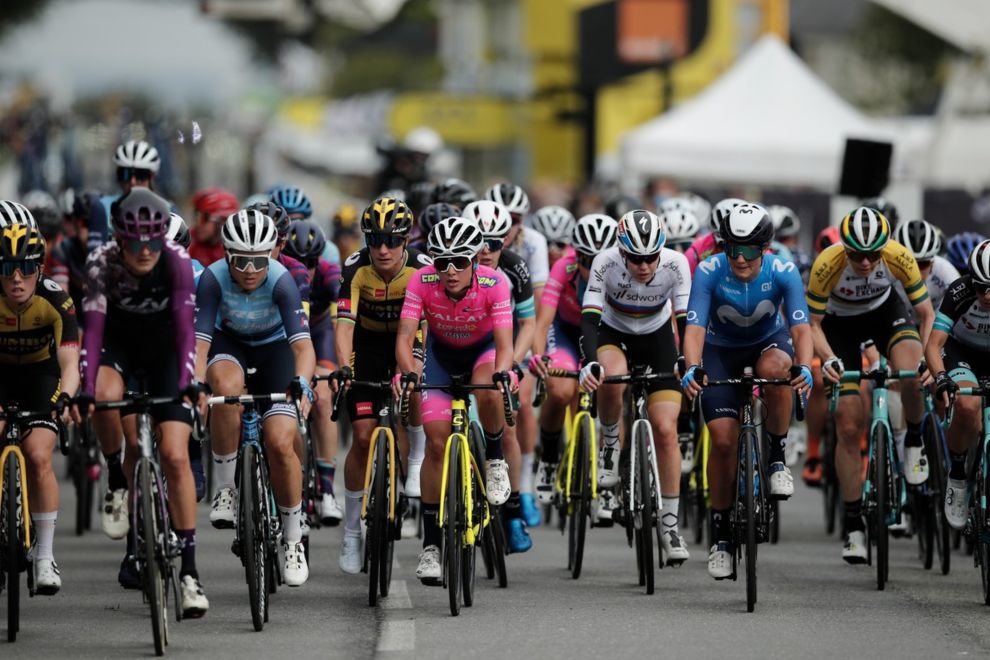 Fewer than two weeks to go until the inaugural edition of the Tour de France Femmes avec Zwift! Stage 1 is set to unfold from the Eiffel Tower to the Champs-Élysées, providing a zippy 82-km start to the action. And it just gets better from there! Although shorter than the men’s course, the Tour de France Femmes will be a super versatile race—with 1,029 km stretched across sprints, mountains and gravel.

We will get to see the women take on two mountain stages, two punchy stages and four flat stages. With so much variety to account for, the winner of this year’s race will indeed have to prove that they’re capable of excelling in all circumstances and under a tremendous amount of pressure. So, with that said, who are the top contenders for this year’s yellow-jersey general classification win? Read on to find out!

As one of the indisputably fiercest riders out there, we expect big things from Marianne Vos as she tackles the Tour de France Femmes avec Zwift for the first time. A formidable figure in the peloton, Vos, who finished second at Paris-Roubaix Femmes to Deignan and in the World Championships road race to Elisa Balsamo in October, has made it clear that she likes being on the podium—with additional victories in two rounds of the UCI Cyclo-Cross World Cup.

She furthered her claim to the ‘GOAT’ status by taking two stages at the Giro Donne this year, bringing her to a monumental total of 30 victories in the race. Representing Jumbo–Visma, she has also praised the varied route of the Tour de France Femmes, making it clear that when she departs from the Eiffel Tower on July 24th—she will be in it to win it.

Another top favourite to take the overall win at the Tour de France Femmes is Dutch powerhouse Annemiek van Vleuten. As a three-time World Champion and two-time winner of the Giro Rosa, she has repeatedly demonstrated her mastery of hilly terrain and will no doubt excel in the mountains on stages 7 and 8. Of course, she’s going to have to fight with everything she’s got in the flat and gravel stages to be in the running for the overall champ. Still, with the support of her very solid Movistar teammates, including Sarah Gigante and Katrine Aalerud, we expect she’ll be an exhilarating rider to watch.

Kasia Niewiadoma of Canyon//SRAM Racing is another rider poised to walk away from the Tour de France Femmes clad in yellow. A versatile all-rounder through and through, the former winner of The Women’s Tour has demonstrated that she’s a threat in punchier stages but also shines in the mountains. Known for her upbeat temperament and friendly disposition—this Polish powerhouse is in good form to show everyone that behind that smile, she’s also ready to kick things into beast mode.

Currently representing Team SD Worx, South African rider Ashleigh Moolman is another solid rider who has everything in place needed for a big win. Exceptionally reliable on the hills, she has won the overall title at the former Emakumeen Bira in 2017 and has made it onto the podium at many top-tier stage races. Watch for her to be in the running for stage wins in the mountains, as well as the overall victory.

French team FDJ Nouvelle-Aquitaine Futuroscope is eager for victory at their home race, and it is looking like Danish dynamite Cecilie Uttrup Ludwig is the woman for the job. She finished second in La Course last year and won a stage of the Vuelta Burgos, proving she has what it takes to go all the way. Known for her passion and enthusiasm on and off the bike, she has been very vocal about her excitement for the race, and we are willing to bet that energy will translate into impressive performance.

Demi Vollering, a teammate of Moolman on SD Worx, will also have her sights set on the Tour de France Femmes’ top honour. Powering through a very strong season, the Dutchwoman won the most recent edition of La Course in a sprint finish ahead of Cecilie Uttrup Ludwig and Marianne Vos. Earlier this season, she helped Team SD Worx have a stunning weekend at Itzulia Women, winning the third and final stage of the race and confirming an unrivalled overall win. Whether she can sustain this momentum over an eight-day race remains to be seen, but we’re willing to bet she’ll be one of the most exciting riders to watch.

Stay tuned for more coverage as the big day approaches! The race will begin on July 24th, 2022.