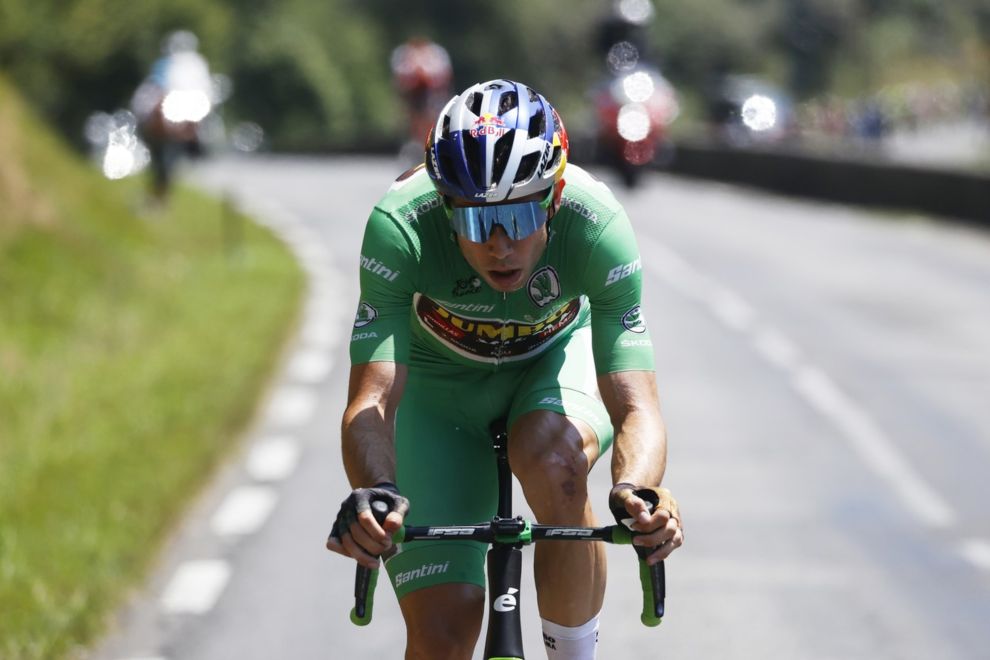 When Wout van Aert took 17 points from the intermediate sprint of Wednesday’s stage 17 of the Tour de France, he secured his victory in the ŠKODA Green Jersey competition. With four stages remaining in the race, there are not enough points available in the remaining stages for anyone to catch him. As it currently stands, the 27-year-old Jumbo-Visma rider has 416 points. That’s more than twice that of his nearest rival, two-time Tour de France champion Tadej Pogačar (UAE Team Emirates), who has 202. The Alpecin-Deceuninck sprinter Jasper Philipsen lies third, with 196 points.

Van Aert must now merely finish the race to claim his green jersey on the podium in Paris on Sunday. Of course, that does not mean that he will now take it easy, simply making sure to finish each remaining stage within the prescribed time limit without taking any chances. I don’t think he is capable of taking it easy in a race. In fact, van Aert has probably been the busiest rider in this Tour, active in most of the breakaways while collecting points and also helping his team leader Jonas Vingegaard in his battle with Pogačar in the race for the yellow jersey.

If there were a jersey or some other award for Most Valuable Cyclist in the peloton, I believe van Aert would be a favourite to claim it. Not only has he been successful in sprints but he has been very active in the mountains as well, taking numerous turns at the head of the peloton going up a climb. In addition, several times during the race he single-handedly rescued teammates – including Vingegaard – from positions that would have seen them lose valuable time, leading them back into contention at breakneck speed.

Wout is giving his all to be in the breakaway 💨 https://t.co/GODMgaauH0

Let’s go back to the crash-strewn stage 5, which included 11 stretches of treacherous cobblestone. In that stage, Vingegaard had suffered a mechanical failure and was in a group of riders that was nearly 2 minutes behind Pogačar. Van Aert took charge of the group and led the riders (which included Geraint Thomas of Ineos Grenadiers, now lying third in the GC) in a remarkable 30-km dash to claw back time from Pogačar. In the end, Vingegaard lost only 13 secs to the Slovenian.

Of the remaining four stages, only Thursday’s gruelling mountain stage, with two Beyond Category climbs, represents a danger to van Aert. He will almost certainly again be one of the riders leading Vingegaard up the slopes, as the battle with Pogačar for the yellow jersey reaches its climax, and he will be near the head of the peloton on the long, dangerous descents. Numerous risks remain, including Covid. As we have learned over the years, nothing is ever certain in the Tour de France.