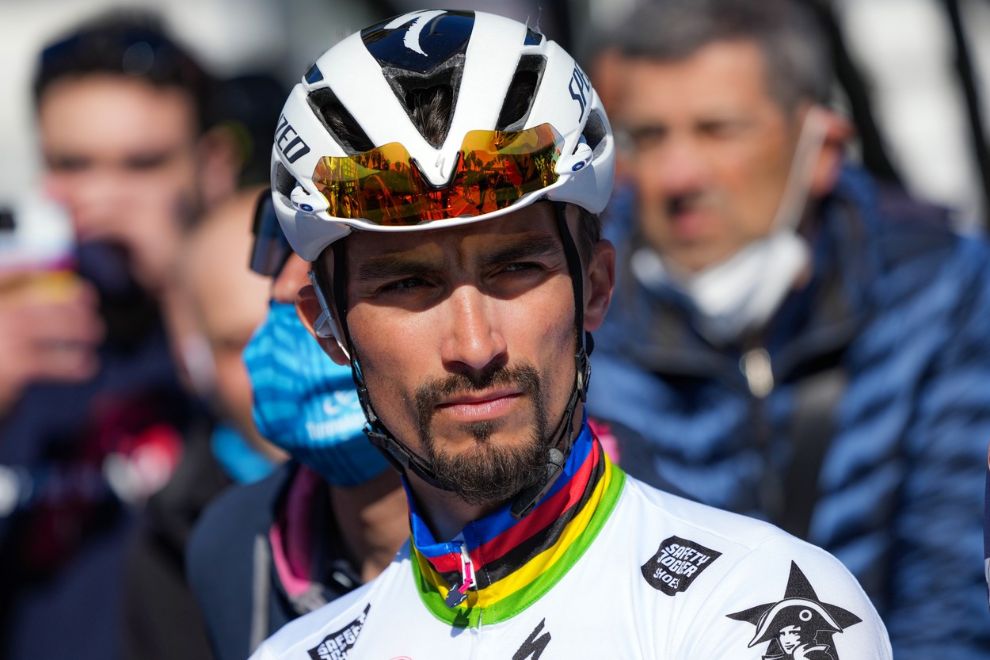 The crash in the Liège-Bastogne-Liège one-day race on April 24 that sidelined French double world champion Julian Alaphilippe (Quick-Step Alpha Vinyl) was just as bad as it looked.

After the race, fellow French cyclist Romain Bardet of Team DSM said that Alaphilippe was the worst affected in the crash, and he was not immediately seen by rescuers because he had fallen into a ditch and slammed against a tree. Bardet who also fell but was not hurt took one look at his compatriot and feared the worst.

“It was just a nightmare,” Bardet said. “When I looked around, I saw Julian maybe five or six meters down, and it was an emotional shock because he was in a bad situation. No one was coming and he really needed help. It was an emergency situation. He couldn’t move, he couldn’t breathe.” Bardet alerted rescuers and scrambled down to help his countryman.

The damage Alaphilippe suffered was severe: two broken ribs, a broken shoulder blade and hemopneumothorax, an injury that is a combination of two medical conditions: pneumothorax and hemothorax. Pneumothorax is better known as a collapsed lung and occurs when there is air outside the lung, in the space between the lung and the chest cavity. Hemothorax is when there is blood in that same space. Hemopneumothorax can be fatal if untreated. To treat it, the blood and air must be drained from the chest using a tube. Surgery is often needed to repair any wounds or injuries.

Alaphilippe’s cousin and coach, Franck Alaphilippe, told L’Equipe after visiting the cyclist in the hospital that despite the injuries he was in surprisingly good spirits. “He made a few jokes, the way he usually does, and I was reassured that he had recovered his inner joker.” However, Franck said, his cousin was “disgusted” that he had slammed into the tree, which caused most of the damage. “He said, ‘Another 50 centimetres and I would have missed the tree, and maybe I could even have got back on the bike and resumed the race. I just had to hit the tree.’”

The crash was the culmination of what has been a difficult year for Alaphilippe, his cousin said. “He has always had some difficult moments but never a black period like this.” Since the beginning of the year, Alaphilippe has suffered from colds, bronchitis, the flu and he crashed three times in fewer than two months. “But from what I’ve seen,” Franck Alaphilippe said, “this experience will make him stronger, give him greater mental strength, he’ll be more determined than before.”

And that seems to be the case. Just one month after the crash, Julian Alaphilippe announced via a team statement that his lung had “completely recovered” but that the broken bones still hurt. However, he said that he had been told that he was “OK to start training.” As a result, he joined his Quick-Step Alpha Vinyl teammates in the team’s training camp in California’s Sierra Nevada mountains.

The charismatic 29-year-old Frenchman went on to say that his health was improving “every day” and that his injuries had not required any surgical intervention. Astonishingly, he was still hoping to be in Copenhagen for the Grand Départ of this year’s Tour de France. “I am trying to be an optimist but I know I need to take my time and to see how the training is going,” he said. “If everything continues as it is, then the option of the Tour de France is still open.”

It would be an accomplishment if the winner of six individual Tour de France stages, the 2018 mountain classification and the 2019 combativity award were fit enough to be at the start of the Tour on July 1. But if he has recovered just some of his form, it would not be a surprise to see him be a factor in some of the later stages of the race. Anyone who has observed the tenacity with which he rides would not bet against him.