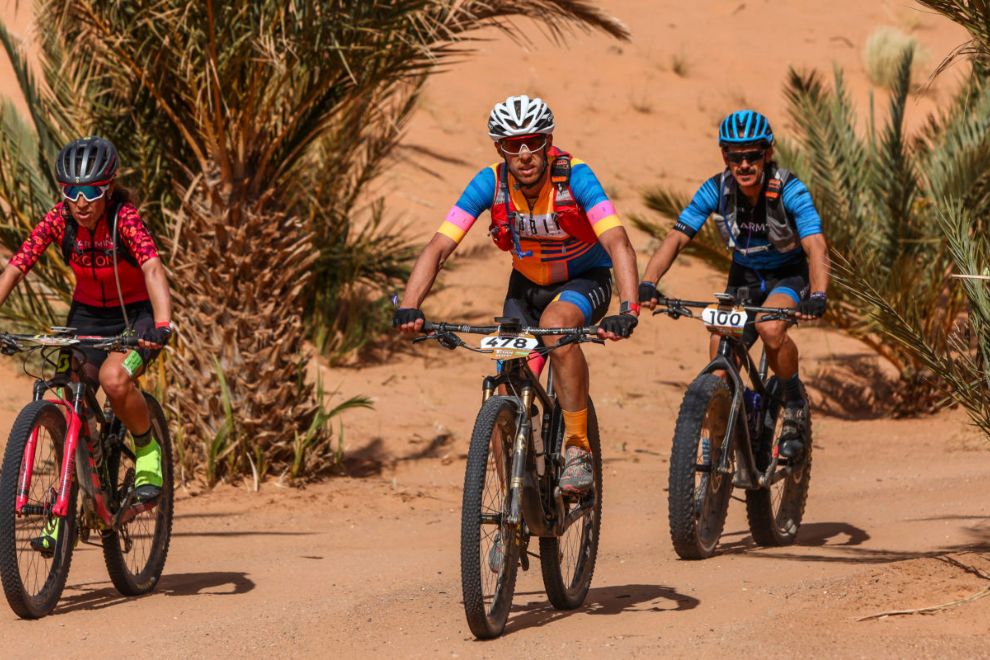 One of the toughest MTB bike races in the world, the six-day ŠKODA Titan Desert Morocco, kicks off on Sunday, May 8, in the heart of the Sahara Desert. The first stage, which covers 119 km, begins and ends at a camp at the foot of the Erb Chebbi, an immense expanse of sand dunes north of the small town of Merzouga.

A total of 523 intrepid riders – 456 men and 67 women – are set to test their stamina, their mettle and their mountain bikes by riding a total of 598 km, including 6,999 m of altitude gain, over rough terrain and in temperatures that can reach 40°C (104°F) during the day. This is clearly not a competition for the faint of heart. From Merzouga, the 16th edition of the Titan Desert moves on to Ksar Jdaid, Fezzou, Er Chebbi, ending on Friday the 13th in the picturesque mountain town of Maadid. Along the way, the riders will have traversed all manner of terrain, from salt flats to sand dunes to rocky trails and mountains, over steep ascents and descents, passages that challenge their ability to navigate and tracks that will test the durability of both the bike and the rider.

The race also includes a Marathon Stage, which is run over stages 2 and 3 and forces the riders to deal with the race logistics without any external help or mechanical assistance in the camp or en route. This means that the riders will have to carry whatever they need to do any repairs and to camp overnight, including sleeping bags. Access to their personal luggage is also forbidden. However, each stage in the ŠKODA Titan Desert will have three “hydration stations,” no more than 40 km apart, which will offer water and, in two stations, isotonic drinks. In addition, before the start of a stage, each rider receives 3 litres of water to fill their bottles and packs.

The first stage also contains the ŠKODA Challenge, which will take place on an uphill section. The top three riders in the Challenge receive bonus times of 90, 60 and 30 seconds, respectively, in the overall classification of the stage. Seven former ŠKODA Titan Desert general classification winners will try to rack up a repeat victory in this year’s race. They include, among the men, Diego Tamayo, Josep Betalú (who has won four Titan Deserts), Sergio Mantecón and Konny Looser. Looser, a 33-year-old Swiss national, was the winner of last year’s race and must be considered among this year’s favourites, along with the other former champions.

Other riders with strong chances to take the laurels include the former WorldTour riders Óscar Pujol, Sylvain Chavanel, Haimar Zubeldia and Melcior Mauri. The latter will attract a lot of attention, not only because he is a former winner of the Vuelta a España (1991) but also because he is 56 years old. A tip of the hat to him for his energy and courage.

Last year’s winner of the women’s competition, Ariadna Ródenas of Spain, is also back and looks like the favourite. She won the 2021 Titan Desert in her first attempt, as she did the Valencia Epic Race and the XCM Spanish Open. Her main competition will come from former Titan Desert GC winners Ramona Gabriel and Anna Ramírez, as well as 2011 Canadian Road National Championship winner Véronique Fortin and another Canadian, Lex Albrecht, who won the 2014 Tour of Murrieta.

One thing is certain: the competition will be very hot.