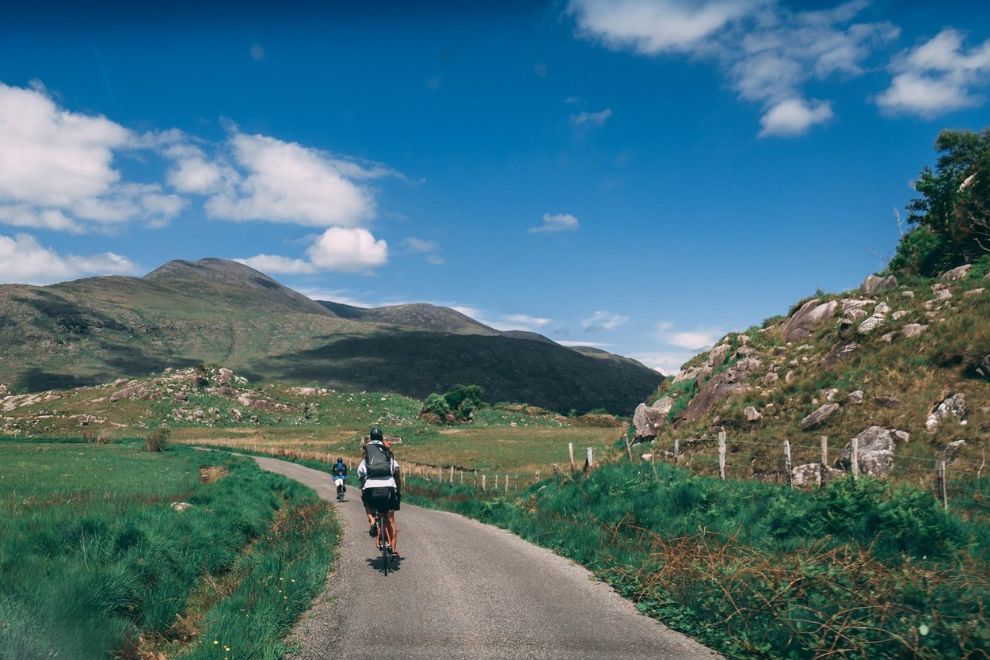 The Wild Atlantic Way is one of the longest signed coastal routes in the world, making for an epic long-distance cycle tour. Covering over 2,500km (1,500 miles), the route winds its way along the west coast of Ireland from the southern tip of County Cork up to the north of County Donegal.

Considering the distance, it’s more often completed by car. But with a desire for adventure and legs to be spun, a ride like this could be an epic, once-in-a-lifetime experience.

As well as being staggeringly long (the longest!), the route includes about 23,000 metres (75,000 feet) of climbing. That’s almost three times the height of Everest! Saying that, since the route is accessible by car, the terrain won’t be hard going if you’re a fan of tarmac. If you cycled 100km every day, it would take you 25 days. At the very least, it’s a long holiday, or you could turn it into multiple short cycle tours.

Planning for this length of ride can also be a challenge, as you have to decide how you want to explore the route. Do you want to carry all your kit and sleep in a tent, or do you want luggage transport and accommodation booked by a tour company? There are companies that offer this option, but if you’re up for a challenge, then often planning your own trip can be really rewarding. Alternatively, you could plan almost nothing at all and see where the wild windy west takes you!

The scenery on the west coast of Ireland is rugged and, would you believe it, wild. Apparently, there are more people than sheep in Ireland so it can often feel remote. From high sea cliffs (the third highest in Europe are on Achill Island) to golden sandy beaches (Rossbeigh in County Kerry) and beautiful mountainous regions (Connemara in County Mayo is a must-see) – you’re never short of spectacular sights.

The remoteness of most of the route will also give you an awesome view of the stars at night. Make an effort to crawl out of your bed or sleeping bag on a clear night and get outside to see them – you will not regret it. The Wild Atlantic Way is home to both of the International Dark Sky Parks in Ireland: Kerry International Dark Sky Reserve and Mayo Dark Sky Park. If you’re lucky, you might even get to see the Milky Way, a sight which is sure to leave a mark on your trip!

Cycling the route will undoubtedly give you a front-seat view of the spectacular scenery that you’ll be sure to encounter. By taking in the sights at a slower pace, you’ll be able to stop wherever you fancy or take alternative side roads if they’re drawing you in.

One thing you’ll hear about the Irish is just how friendly they are. They have a culture of being open and welcoming to outsiders. They might even buy you a pint of Guinness if you get friendly in a pub!

You might be interested to know that there are parts of the west coast of Ireland where Irish is the first language. Whilst everyone you encounter will likely speak English, it might be useful to learn a word or two in case you’re in an area where they speak the Irish language as their mother tongue. These areas are collectively known as Gaeltacht.

Religion plays a large part in Irish culture – though of course not everyone is religious. You’ll see plenty of churches, cathedrals and graveyards. Croagh Patrick is a must-see if you’d like a taste of Irish religious culture. It’s also around the middle of the route so could provide a great day off the bike to stretch the legs! Standing at 764m, Croagh Patrick is a mountain renowned for a long-standing pilgrimage in honour of Saint Patrick, on the mountain on which he fasted for forty days in 441 AD. The pilgrimage takes place on the last Sunday of July, but you’ll still find plenty of people walking the route on a fine day.

Ireland is a historical country, with the first human settlements dating all the way back to 6000 BC. This long-standing history is visible in the landscape and whilst travelling by bike, be sure to take note on your maps of any historical features or visit one of the many hundreds of brown signs you’re likely to see from the road (these signs will point you towards tourist sights and will often include things like castles). You’ll also see cathedrals, stone-age monuments, forts, monasteries and even the odd megalithic tomb.

5. The freedom to explore

No matter how you decide to travel the Wild Atlantic Way, whether in comfort or roughing it, you’ll be in awe at every curve and bend. The waves of the Atlantic ocean crashing over the sea front will provide you with constant invigoration that will spur you on to the next cafe stop. Might we also recommend taking a dip in the sea whenever you can – the Irish aren’t afraid of a bit of cold water!

The Wild Atlantic Way is well sign-posted with an unmissable blue WAW sign, however, we recommend you take a road atlas to allow you to explore any side roads if you feel like the campervans are taking over. Though it’s unlikely to ever feel all that busy and you’ll have the wide-open road all to yourself for long stretches. Happy travels!