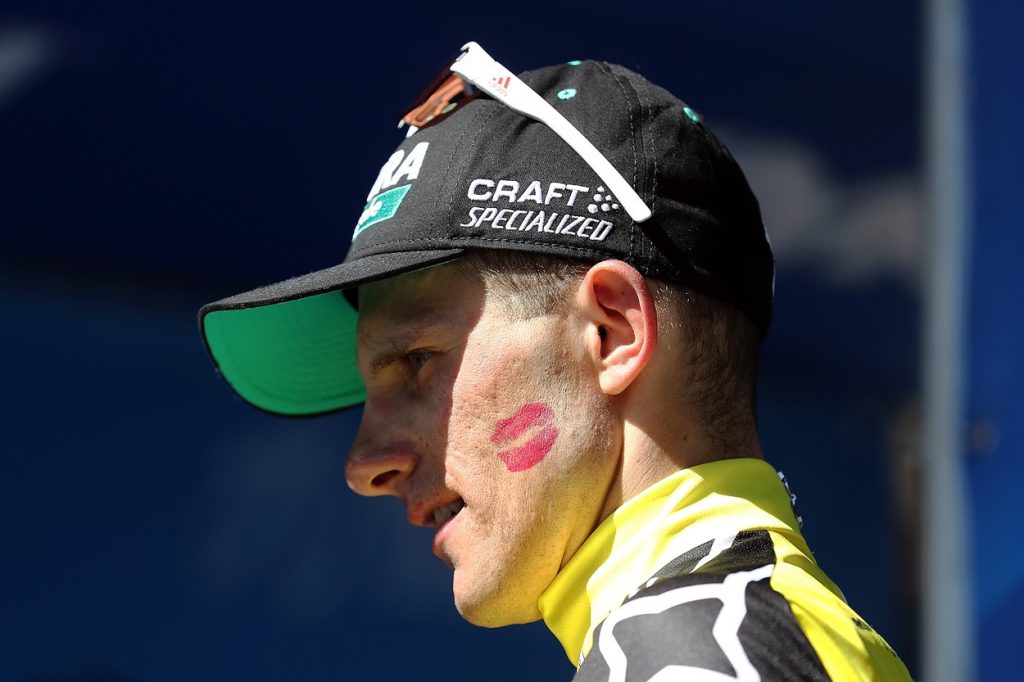 Most of the time, you only see the Tour from the riders’ point of view – the victories, the fails, the thrill, the pain. But have you ever wondered what it is like for their closest relatives? We talked to the wives of a couple of professional riders in order to learn what it means to be on the other side. To save their family lives, we were asked to keep their names in secret, however, all you’ll read is true. Here it is in 14 points.

As a relative of a professional cyclist, you are already accustomed to the general rule that there’s no way to plan weekends to spend together, as anything scheduled might be a subject to change anytime, and the Tour de France is just proving that theory. If the team manager resolves to summon your dearest to take part in racing only two weeks before the Tour because someone else has declined, your summer holiday is over.

When visiting the Tour, the reality is far behind the expectations. You must get over the fact that you’re likely to be kept separated from your darling most of the time. Even after the stage has been completed, cyclists have a list of tasks for reducing soreness like stretching, massage, fitness or a light training for the recovery of exhausted muscles. Some teams strictly forbid any kinds of visits from the outside, either to prevent the racer from being distracted or eventually lured into using banned performance-enhancing substances. Even if the visits were allowed, you have to announce your exact whereabouts in advance, which makes the time spent together looking like if it were a part of a military drill.

When everything goes alright with racing, you share the joy and success together. But then there’s the darker side of things. Sitting stuck deep in your chair, you anxiously hope there will be no crash on the stage. Once you get a glimpse of cyclists falling over one another, you only pray that your beloved has avoided or left the collision unharmed.

While watching the race, you morph into the loudest cheering fan that has ever entered your local sports bar.

During the race, your nutrition becomes varied and appetising again. While eating together, it’s hard to enjoy a dessert after lunch but now, you can freely enjoy whatever you have a fancy for.

You spend hours going to and fro through the itinerary searching for the details of the whole race.

You’re probably the only person in the world with the ability to recognise your beloved in the cluster of riders aired on TV from the helicopter.

Unlike common spectators, you know your sweetheart’s exact role for today’s stage – like giving shelter to the leader, controlling breakaways or seeking water bottles – which takes him out of the eventual fights for the front positions. This knowledge makes you feel extremely sorry about all inappropriate internet comments that will inevitably come about the performance of your darling.

The journalists are chasing you with importunate questions, regardless if it is Sunday evening or your working day.

Living with a professional cyclist turns you into an extremely patient and sympathetic person. Just imagine, how angry most people become if they are forced to miss but one single meal. Cyclists eat, more or less deliberately, far less food than they’d like to, making them rude to anyone sometimes, family members included.

You can hardly avoid comparing conditions and equipment of different teams’ facilities. While the rich teams’ riders rejoice in trucks fitted with showers, couchettes or even a bath with crushed ice for faster muscle recovery right after crossing the finish line, the less blessed teams must travel to the hotel bathed in sweat.

You must understand that your darling has obligations to be carried out on account of his team, fans, sponsors, media, and others, making you apparently the least important person on your beloved’s chart.

For most cyclists, taking part in the Tour de France race doesn’t bring more money into their family budget, however, being involved means there are invitations about to come asking them for taking part in the so-called criterium races in cycling countries like Germany or Belgium, which means, finally, a well-paid reward.

When the Tour is over, your husband brings home a pile of dirty clothes and jerseys. He himself is completely exhausted and sometimes even scraped, however, if his Le Tour mission was successful, you will experience wonderful days together.