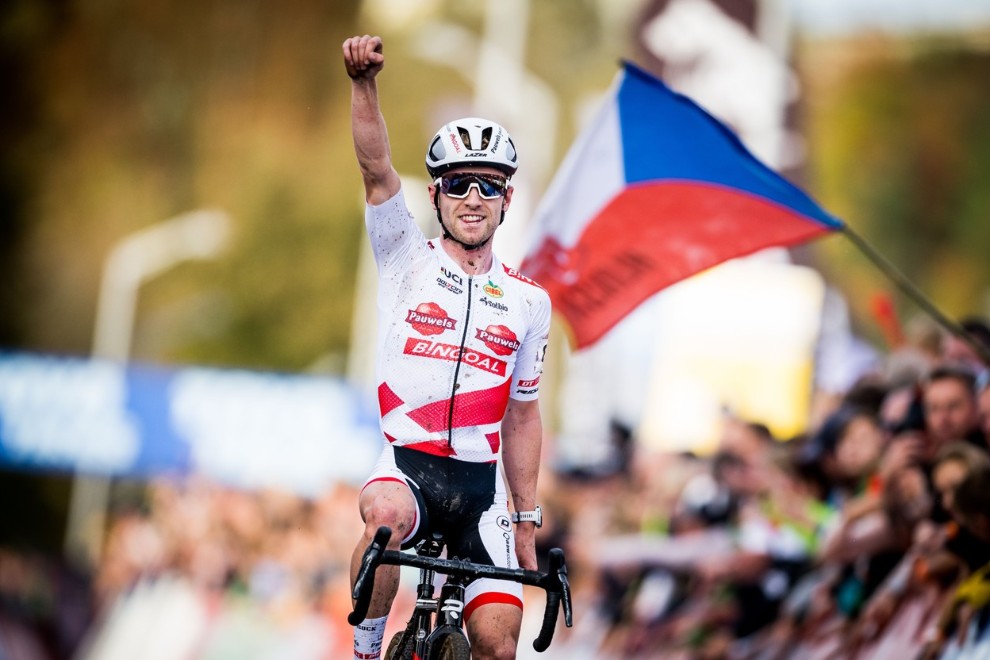 The Belgian continues to dominate the UCI Cyclo-cross World Cup. This time, he rode away from all his rivals to claim a solo win in Tábor. Van der Haar finished second and Vanthourenhout placed third.

Eli Iserbyt (Pauwels Sauzen-Bingoal) won the opening two events in the USA – Waterloo and Fayetteville – and added another one in Tábor, despite the fact that it is not his favourite course. He finished second on three different occasions in Czechia as an elite.

“I’m very happy but very tired,” Iserbyt admitted. “I had to dig really deep, the jetlag was still there (returning from America) so I had to push myself a little bit in the first half of the race to be at the front because it was definitely a hard race for us.

“It feels good to win here, this was a little bit of my black horse and I’m happy I could conquer it today. We are already looking forward to next weekend and three hard races before the European Championships.”

Iserbyt made his move with roughly 15 minutes to go and built a margin no one could erase. Lars van der Haar (Baloise Trek Lions) left it until the last lap and a half to start the chase, which ultimately proved to be too late.

“I waited a little too long and Eli was a bit too strong,” added van der Haar.

“Fair enough, he wins, I tried and I couldn’t close the gap so he was the best today. I was more focused on the last three laps today and I didn’t really mind the race coming back (together) today.”

“It was very tactical, me and Eli, everybody looks at us so it was difficult,” noted Iserbyt’s teammate Michael Vanthourenhout who finished third. “I think we did a good job, Eli won and I was third so today was a good day for us.”

Czech star Zdeněk Štybar (QuickStep-Aphavinyl) who was cheered on by the home fans had to battle his way out from a fourth-row start and eventually celebrated a 17th-place finish.