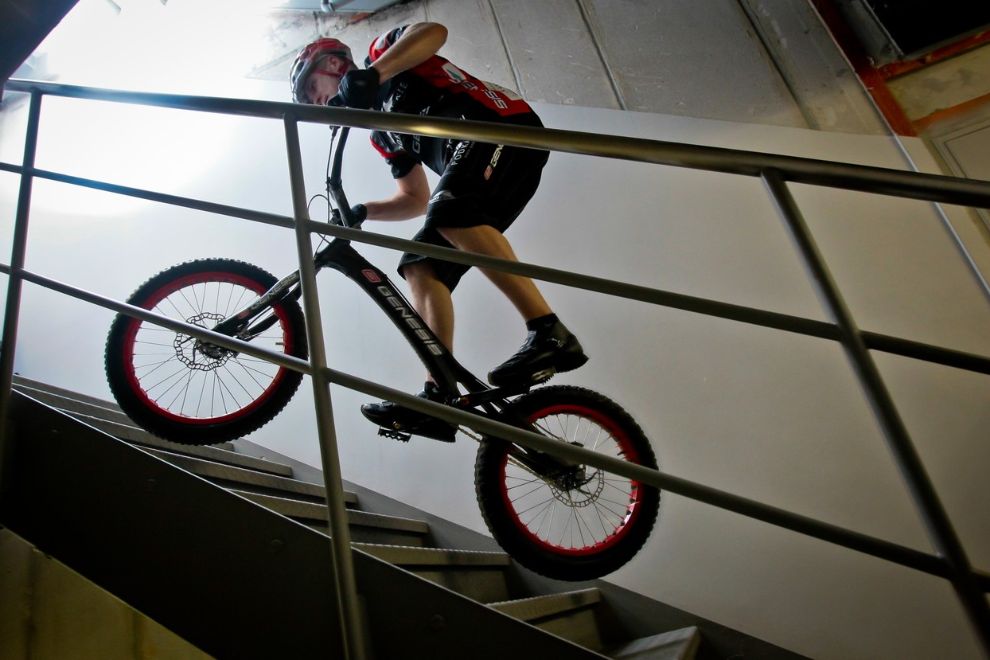 Cycling is awesome and we all know that. However, from time to time, there are people who remind us just how extraordinary bike riding can be. Well, most of them are stunning on Tour de France climbs, in Giro d’Italia attacks or simply calf-bursting sprints at the end of the UCI’s championship. Nonetheless, there are those who go beyond the extraordinary and give us a once-in-a-lifetime performance that, naturally, ends up as a World Record. So, let’s have a look at the seven most incredible bicycle-related World Records.

Did you know that the average race speed of an F1 car is 260 kph? That’s way too slow for Bruce Bursford, the current holder of the cycling world’s high-speed record, who managed to beat the F1 average speed by 75 kph. This madman managed to get to 334.6 kph pedalling on a bike that was towed to 160 kph and was motor-paced. The record was done on an indoor flat surface but still, pedalling at this speed is simply incredible. I wonder if Bursford isn’t actually a cyborg.

Denise Mueller-Korenek owns the high-speed record from a standstill as she managed to reach the mind-altering 296 kph. She wasn’t towed but Mueller-Korenek had the draft from a motorised vehicle in front. Can you imagine riding your bike at 300 kph? I feel terrified whenever I go beyond 70 on a downhill, so to go 4 times faster, I would certainly need a change of britches afterwards.

Greatest distance covered in a year

Being able to ride fast is not what cycling is all about, especially when you are going faster than an F1 car. Endurance is what counts as well and for nearly 90 years, legendary Tommy Godwin was on top of that list as he managed to cover the distance of 120,805 km in 1939. His record stood firm until US rider Kurt Searvogel beat it by under 2,000 kilometres in January 2016. The cyclist from across the ocean managed to cover 122,473 km in a year but unfortunately for him, Amanda Coker from North Caroline saw his triumph and got inspired. Five months after he finished, Amanda started her attempt to beat the record. She flashed through the women’s record in a few months and went on to beat the men’s. With 40 days left, she passed Searvogel’s achievement, and by the 365th day, she gained another 16,000 km. She finished the year with 139,326.06 km. That’s roughly 382 km per day. We mere mortals are left to our imagination.

Bunny hopping is essential for anyone who wants to ride in the mountains. It’s one of those skills that can help you gain control, master your balance and help you avoid unexpected obstacles on the road. So, naturally, when there is a useful move, there is this one guy who wants to take it to the extreme. With bunny hopping, this was Rick Koekoek. The Duch rider took it upon himself to awe the world with the highest bunny hop ever. In July 2017, he managed to jump 1.45 metres with his bike. He can practically jump over bushes and small trees in the mountains, which I find quite useful indeed. Koekoek did it from a standstill position, so probably when moving, it would be harder, but still, getting over a 1-metre rock without having to step down from your bike is more than impressive.

What’s the longest distance you’ve covered on your bike in 24 hours? If it’s more than 941.873 km, you should call the Guinness Book of Records since this is the world’s best achievement so far. Austrian ultra-cyclist Christoph Strasser set the record on a Swiss velodrome on 14th October 2017. He managed to hold an average speed of 39.25 kph, which, although on a velodrome, is incredible. If you thought, ‘hold my beer, I’m going to beat it,’ keep in mind that having a pulse of 150+ for 24 hours may prove fatal for most people. Before attempting the record, Strasser underwent several high-profile endurance races as he was the holder of the record for the fastest Race Across America finish in just 7 days, 15 hours and 56 minutes. However, this wasn’t his most recent record. In 2017, he covered only 941.873 km.

In July 2021, Strasser decided that 942 km for 24 hours was an embarrassment, so he made another attempt at the record. Strasser beat his record by 84 km and recorded a distance of 1,026.21 km. His average speed was 42.76 kph, so good luck to all challengers.

Most elevation gained in 48 hours

Can you imagine climbing Everest with your bike? While this will most certainly be classified as a suicide attempt, actually gaining the elevation of the highest peak on earth for 24 hours is much safer. Frankly, it became increasingly popular with the rise of Strava users who started challenging each other to do various incredible tasks. However, Everest was way too small for Craig Cannon who gained a staggering 29,623.3 m in 48 hours. The guy, who started riding just a year earlier, climbed the same San Francisco hill 228 times in just two days. Now that’s what you call a knee-bending effort. Or more like a knee-shattering one.

While all previous records deserve admiration and genuinely sound incredible, some cycling records are simply unimaginable. For example, the one of Kurt Osburn who is better known as the wheelie king. The US cyclist has done several records on his back wheel, the first one being the longest non-stop wheelie of all time – 11 hours. I’m not sure if I can even ride this long on two wheels but that’s beside the point. That, however, was just a warmup for the extravagant Osbourn who decided that 11 hours on one wheel is way too short of a time, so he took up a coast-to-coast journey in the US, which took him 74 days. But, of course, no man can survive 74 days without sleep, so he wasn’t on the bike all the time. Moreover, he had four separate punctures, and interestingly, one of them was on his front wheel. I have no idea how this happens when the wheel is in the air but I also have no idea how someone can make 4,569.89 km on their back wheel, so I guess that’s fair.

The highest number of steps climbed on a bike

Talking about climbing, we can’t miss out on the people who don’t like climbing stairs on foot. Well, Krystian Herba was one of them. However, he found a better way to gain floors without using a lift – he simply used his bike. So, to make it obvious, he climbed 2,754 steps in 1 hour and 22 minutes using only his bicycle. He actually climbed the Shanghai World Financial Centre in China, from top to bottom. That’s 100 floors on a bike, upwards. I wonder if he went down the same way or if he used the lift.

These impressive achievements are only a tiny sample of the overall massive number of cycling records. Still, if you have a weird idea about a cycling record, share it with us, we’d love to hear it.