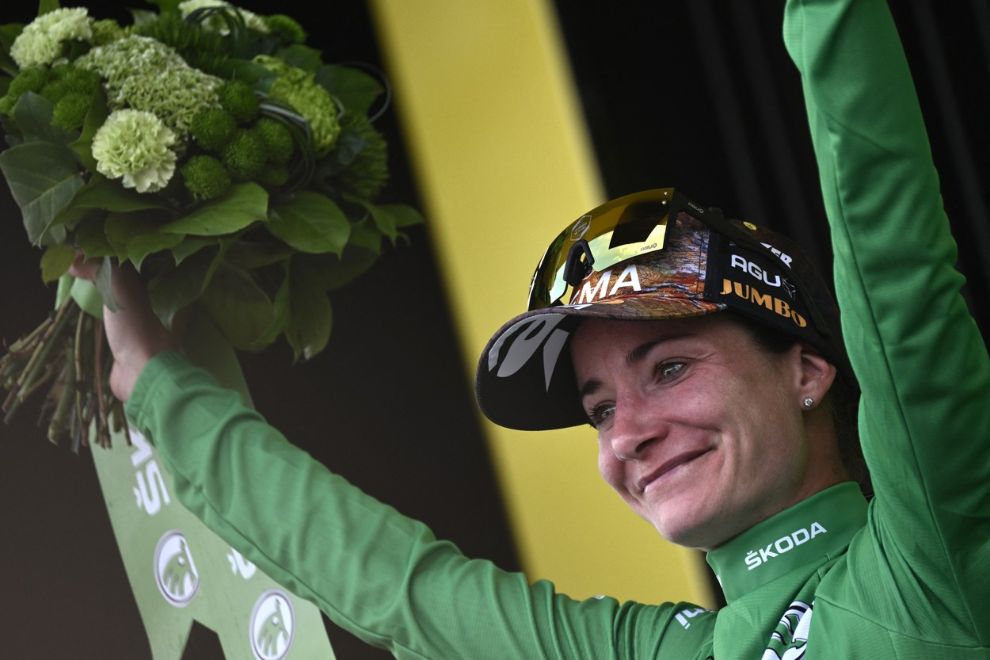 What a race. Cycling fans got a thrilling prize with Mariana Vos’ performance in the Tour de France Femmes. Vos lit up the race and impressed with her all-around skills, racking up stage wins and taking possession of the yellow and green jerseys for a period.

Fireworks started early for the 144 contenders on stage 1 once they hit the iconic Champs-Élysées for twelve laps. A handful of inspired riders attempted early breakaways but gained little traction. Everyone wants to win on the Champs, and the equally motivated peloton reigned them in before the first intermediate sprint.

As the first points for the Škoda Green Jersey came up for grabs, Vos unleashed her sprint early with fellow Dutchwoman Lorena Wiebes (Team DSM) on her wheel, beating her to the line. But as the second sprint opportunity approached, both Vos and Wiebes weren’t in contention as Belgian rider Lotte Kopecky (SD Worx) showed she was equally hungry to wear green by taking all the points.

In the final straight on the prestigious Champs-Élysées, Vos started her sprint early only to be overtaken by the power of Wiebes in the final metres. With the stage win and 70 points to her name, Wiebes took the first yellow and green jerseys of the Tour de France Femmes. Kopecky ended the stage with 60 points and Vos 55.

With Wiebes in yellow for the start of stage 2, second-place Kopecky wore the Škoda Green Jersey. The predominantly flat stage was another perfect opportunity for the sprinters. And the teams worked hard to keep their sprinters at the front, setting a furious pace to be well-positioned for the first points of the day.

The intermediate sprint on the first passage through the finish line in Provins went to Dutchwoman Maike van der Duin (Team Le Col – Wahoo) who had opened a slight lead on the pack after breaking away with 26 km to go. The bunch was close behind and Wiebes and Vos claimed second and third place points, respectively.

Not ready to cede to Wiebes, Vos and five other riders, including the current World Champion, Italian Elisa Longo Borghini (Team Trek-Segafredo), went off the front after the intermediate sprint, catching the peloton off guard. This move shredded the pack into segments, eventually distancing Wiebes who knew she would lose the yellow jersey.

Victory assured for one of the breakaway riders, Vos attacked in the final 200 m to take the stage and maximum points. Vos took the yellow and green jerseys from Wiebes who finished 16 points and 29 seconds back. Kopecky added another 25 points to bring her total to 85, keeping her in contact with Vos and Wiebes.

With Vos in yellow for Stage 3, the Škoda Green Jersey defaulted to Wiebes from the start. With four category-three climbs between Reims and Epernay, the itinerary for the day was destined for the climbers. As a result, the first intermediate sprint points went to none of the top three green jersey contenders.

The undulating route and series of climbs distanced Wiebes from the head of the race but not Vos nor the Danish National Champion Cecilie Ludwig (FDJ-Suez Futuroscope). The two duelled it out in the final metres with Ludwig outsprinting Vos for the stage. Vos lost the stage but she earned precious second-place points, boosting her lead to 160. Gaps started to form as Wiebes ended the day with 113 and Kopecky 102.

With no change in the leaders’ jerseys, Vos was in yellow and Wiebes in green for stage 4. The course for the day was peppered with 3 and 4-category climbs, including 13 km on gravel roads that added an extra element of excitement and unpredictability, giving a technical advantage to cyclo-cross riders like Vos.

The stage ended with the TDF Femmes’ first solo victory by the European time-trial champion from Switzerland, Marlen Reusser (SD Worx), who broke away from the pack 23 km from the finish. Vos crossed the line in the third group, assuring yellow and green for the start of stage 5. As Vos extended her points lead to 186, Wiebes and Kopecky seemed destined to battle it out for second place with 128 points each.

The longest stage of the Tour de France Femmes represented another opportunity for the sprinters as the peloton came one day closer to the mountains. Determined to keep Wiebes in the hunt for green, Team DSM came to the front and took control after an early breakaway quartet grew their lead to 3’40”.

As the pack closed in on the break, the intermediate sprint points went to the riders in the breakaway, leaving crumbs for Vos and Wiebes. Undeterred, Wiebes outsprinted Vos to take two additional points. As racing continued, a massive crash involving 50 riders, including Kopecky, broke the peloton in two.

The result was a duo breakaway that resisted the peloton for a time but with Jumbo-Visma, SD Worx and Canyon-SRAM leading the chase, their dreams of a stage win were put to rest 2.4 km from the finish. It was clear a bunch sprint would determine the winner and Wiebes was up for the task. She made an explosive attack in the final metres, reaching an impressive 61.9 kph, dominating Vos to the line to claim her second stage win and maximum points.

Vos finished in second place, keeping the Škoda Green Jersey for another day, but not by much. Her stage victory boosted Wiebes to 191 points, vs Vos’ 217, closing the gap to a mere 26 points. With time running out before the mountains, it was clear the battle for the remaining sprinter’s points would be between the two sprinters in Stage 6. It would be Wiebes’ last opportunity to take Green from Vos.

14 riders formed a group that gained close to two minutes on the peloton, shedding doubt the sprinters would battle for the stage win. But the peloton rallied back and reduced the gap to 45 seconds over the top of the Route de Mollkirch and redoubled their efforts on a short but technical descent led by Vos. Wiebes hung on over the top, but tragedy struck as she crashed on the descent.

Wiebes went down hard, bleeding heavily from her elbow, but eventually got back on her bike. By then, the peloton was long gone. With only one support car (compared to two in the men’s Tour) up the road and no teammates, she was on her own. It was clear she wouldn’t contest the sprint and her dreams of green were gone; she scored zero points on the stage. At the finish, Vos outsprinted her competitors to take her second stage victory, increasing her points lead by an additional 76 points. Kopecky was also involved in a crash but got back on to finish third and grew her point total to 164.

With Vos still in yellow, Wiebes started Stage 7 in green but was forced to abandon shortly after because of the injuries sustained the day before. As the complexion of the course changed, yet another Dutch rider and pre-race favourite, Annemiek Van Vleuten (Movistar) attacked and won the stage by over three minutes. She took over the yellow jersey with one stage remaining, a stage that suited her perfectly.

Vos lost yellow but was still going home in green. With 90 potential points remaining in the course, she only needed to cross the finish line on the Super Planche de Belles Filles to take the Škoda Green Jersey. She finished well behind her co-patriot and eventual race winner, Van Vleuten, but dominated the green points category, finishing with 98 points ahead of the runner-up, Kopecky.

The first Tour de France Femmes was a huge success. The athletes gave it their all in front of massive crowds and battled through crashes, July temperatures, and the pressure of the responsibility of showing women merited their own Tour after a 33-year drought. The level of competition, sponsors, TV coverage, and crowds proved that modern women’s racing is here to stay.