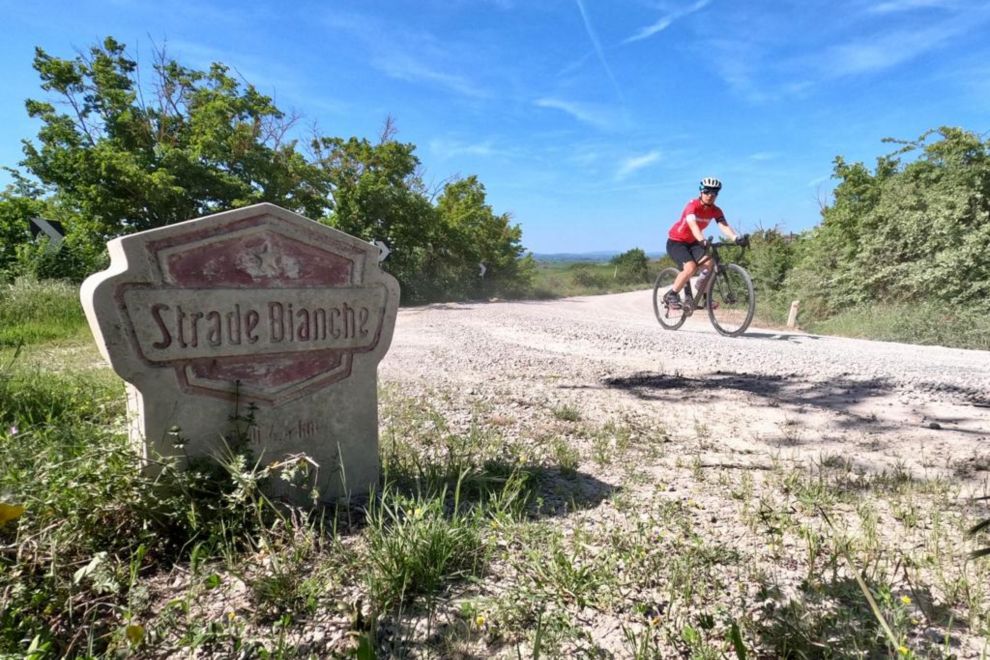 The Italian term Strade Bianche refers to the seemingly endless gravel roads of fine white crushed stones that attract thousands of cyclists to Tuscany, Italy, every year. Inspired by two great races, the professional UCI Strada Bianca and the historic one called L’Eroica, many people are eager to have a ride on the specific surface of the local white roads. What can you expect from the authentic Strade Bianche experience?

If professional racers can cover the entire route of more than 200 km in just one day, an average cyclist can take advantage of dividing the whole portion into several stages. “We split the route into three parts, never riding more than 80 km in one leg. We didn’t rush anywhere and rather enjoyed the ride,” says Tomáš Jančárek from Prague who had been looking forward to the Strade Bianche experience for several years and eventually made it to Tuscany this year, accompanied by his wife.

Depending on their mood, visiting cyclists are encouraged to taste less of the cycling struggles and more of the local wine. “If you’re not afraid or too shy, you can stop at one of the many farms along the way, knock on the gate, and with a handful of luck, you can be invited to drink a glass of water or wine. Sometimes, the generous locals do not charge you money,” says Tomáš.

Riders recommend carrying more water than people are normally used to. Even in the spring or autumn, the roads are exposed to the harsh Italian sun, and in the summer, afternoon cycling can be akin to staying in a microwave. Having your own water supply is also important due to the uncertain opening hours of Tuscan grocery stores. “We waited about an hour for one shop to open,” laughs Tomáš but adds in the same breath that you will never suffer from hunger in Tuscany as you can stop and have a delicious lunch, coffee or gelato in every town or village.

“A gravel bike is definitely the best option,” claims Tomáš. While gravel roads would be uncomfortable and sometimes even impossible to ride on a conventional road bike, a mountain bike would be too slow and defying.

Typical gravel roads make up to 70 per cent of the entire route, the rest is covered with tarmac. When talking about gravel, many cyclists shudder in horror because rough stone roads are capable of puncturing even durable mountain bike tyres. Here in Tuscany, though, gravel is quite different. From creamy beige to bright white, the gravel is known for its mildness that is kind to gravel bike tyres.

“After one day in the saddle, you get used to it and learn to ride on this specific surface without much effort,” says Tomáš from Prague. The ride is definitely not comparable to what people are used to on smooth tarmac roads, though. Riding on the local roads is rather bumpy and requires some MTB skills.

For many riders, climbing might be a bitter surprise. With Tuscany postcards in mind, one would expect hills only gently undulating up and down but the comforting illusion fades away no later than after a ten-kilometre 12% climb that leads to the village of Montalcino. Even though most of the hills are located in the northern part of the route, climbs in the south can be also demanding. “The total elevation gain is about 3,000 metres, which is one of the reasons why e-bike users are quite often seen among normal cyclists,” says Tomáš.

The difference between the northern and southern parts is also in the vegetation. While in the north, the roads are lined with groves of oaks and pine trees, southern roads cross vast fields that provide absolutely no shade for the passing cyclists.

Although many people worry about dust, the reality is not so dramatic. If car traffic on normal Italian roads sometimes feels like a car racing circuit, you meet up to one car per hour on the white gravel roads, meaning the dust is usually stirred up by tractors. “In my experience, local farmers are extremely considerate, and they stop and let you go anytime they see a biker,” Tomas says.

Riding on the Strade Bianche is challenging and, as the professional racers say, cannot be compared to anything else they know from the classics. “We were thrilled and will definitely be back again soon,” Tomáš promises.