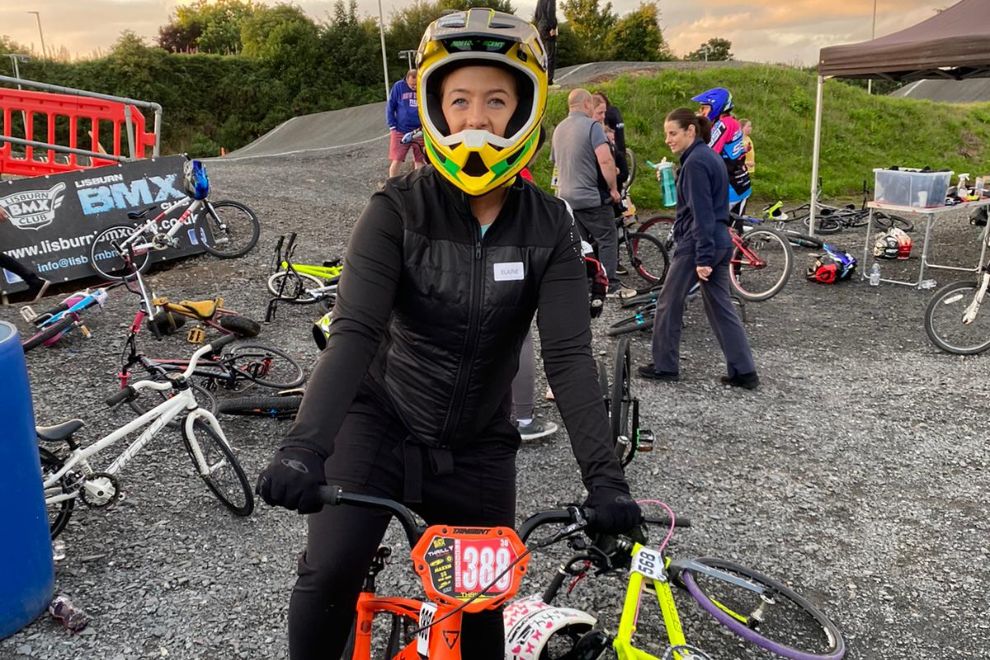 “Sport can often be viewed as elite, structured or highly competitive but my goal is to show that cycling can be an option for those who label themselves both as ‘sporty’ and ‘non-sporty’. There’s more to cycling than having all the gear and being head to toe in Lycra’, and I hope through this new campaign, people will see this!”

Study after study shows that fewer women ride bikes than men. So, what’s the deal? When Cycling Ireland decided to investigate the situation along with a research team, they found that the most significant factors limiting female participation were lack of confidence and perception of exclusivity. At the same time, almost 40 per cent of women interviewed said the top benefit of cycling was the social aspects and interaction.

All signs pointed to the fact that women wanted to ride but the key to making the sport more accessible was greater inclusiveness. With this in mind, Cycling Ireland launched ‘IT’S NOT A RACE,’ a campaign directed at women that is all about communicating the different available cycling opportunities. They are motivated to share the idea that cycling doesn’t always have to be a race. You don’t have to be head to toe in Lycra… but it can be that too!

At We Love Cycling, we are a fan of any initiative aimed at getting more people on bikes while celebrating the multitude of ways that cycling enriches lives. As such, we were delighted to sit down with Elaine Cahill, Cycling Ireland’s Women in Sport Officer, to discuss how this campaign got off the ground, the way it is helping young women resist labelling themselves as ‘non-sporty,’ and why it is really just the beginning of a larger movement to get people riding!

Thanks for joining us, Elaine! What has been your path to working to advocate for women in sports, and how is IT’S NOT A RACE mobilising its mission of making cycling more accessible and encouraging more people to ride?

I have always played and been involved with sport in various roles—as a player, through coaching, refereeing, committee member and working in sports development—so I’ve seen multiple sports through many lenses. I want other women to have the best possible experience in sport and physical activity, whether that’s through physically participating or in the coaching, officiating, and leadership space. I am passionate about sharing knowledge with others and making women feel welcome in the cycling community.

With IT’S NOT A RACE, we’re asking people to put their own spin on the campaign by sharing what cycling means to them. For some people, it’s being outdoors, it’s the coffee and cake with their friends, it’s the school run or mode of transport to and from work, and for others, it is a race. Through sharing the stories of our campaign ambassadors, we hope to inspire others to take up cycling, maybe dust off an old bike or even try out a new discipline!

Cycling has a history of being a male-dominated sport, and I want to have a part in changing that. I want women to feel welcome. There’s a sport out there for everyone, and I want to show that cycling can be an excellent option.

What have been some memorable examples you’ve witnessed of cycling helping women to feel more empowered or pursue their dreams?

The online training programmes, which were run as part of the Cycling Ireland Women in Sport programme, saw more than 2,500 individual women and girls take part across two years. The feedback received each week warmed my heart! To hear from women of all ages and how their confidence grew over the weeks was so touching.

During Zoom sessions, there were opportunities to ask questions and the women were also invited to be part of a private Facebook group where the community created was able to be sustained. I have heard from women who have returned to cycling after illness, have signed up for their first race or sportive, joined clubs or have found a new sport from doing the online training programmes. I never imagined the impact weekly Zoom sessions would have on so many women and their lives!

That’s wonderful. Having a platform to share stories and experiences is so important. What other plans are in place to harness the momentum of the community that will engage with these stories?

We have so many plans for this campaign! We are relaunching a club toolkit that will help to guide clubs who are interested in increasing their female membership, whether that’s in the active participation, coaching and officiating or leadership and governance space. The toolkit will also help in terms of visibility—ensuring their website and social media are welcoming to women whilst also ensuring they have role models within the club.

We are currently working with clubs to run Women on Wheels, a female-only beginners cycling programme. We will continue to work closely with the Women’s Commission who do phenomenal work to support events and races and organise their own series of events such as the Corkagh Park summer series. Currently, I am interviewing the ambassadors through Facebook live videos (which are then uploaded to our YouTube channel). We plan to continue the series of interviews and highlight the great work done by women in sports and use it as an avenue for others to learn from and be inspired.

What would be your advice for women who are casual cyclists intrigued by the sport but intimidated by all the gear, jargon or people in Lycra?

It is easier said than done but ignore the jargon and just do you! Sport can be such an intimidating word. A recent study by Sport Ireland has shown that by the age of 13, girls label themselves as ‘sporty’ or ‘non-sporty’… how scary is that! Sport can often be viewed as elite, structured training, competition etc. but my goal is to show that cycling can be an option for those who label themselves both as ‘sporty’ and as ‘non-sporty’. There’s more to cycling than ‘having all the gear and being head to toe in Lycra’, and I hope through this new campaign, people will see this! My advice would be to check out our wonderful advocates’ profiles on our website, and feel free to get in touch with one or more of them who would be more than happy to connect with you. Also, get in touch with your local club, which will welcome you with open arms.

Why do you think it is important that we carve out specific spaces for women in sports and society?

The research tells us so! 13% of those interviewed said the most prominent factor limiting participation was not enough female-only clubs/groups. 26% said more female groups were the key to attracting more cyclists, and 28% said the female group dynamic was the main factor in retaining females in cycling. The number-one priority to grow female participation was to increase access to junior female clubs. The number-one priority to make cycling the preferred sport was to increase the number of female-specific activities and events. It’s there in black and white for us to see!

I would love to see the day that we no longer need Women in Sport Officers. Still, until women feel welcome, clubs understand that the needs of women are sometimes different from men, and women have the confidence to step into and stay within the cycling community, then we have to continue to fight for specific spaces for women in sports and society.

The campaign is centred around the idea that competition does not always have to be the goal of sports. But, at the same time, by seeking a new challenge and starting to make milestones, you can feel confident to do something else. What do you think about goal setting and competition in sports, and how is the campaign working to ensure that the relationship between athletics and mental health stays a positive one?

Goal setting is vital for everyone, not just those in competition. It helps people stay motivated and on track—whatever that means for the individual. The problem with goal setting is people tend to overestimate their goals and perhaps underestimate the time and work needed, so it’s easy to get disheartened or give up.

The key to goal setting is being realistic, it’s easy to say we would like to do x or could do y but you need to ask yourself if you have the time and the drive to get to where you want to be. What cost are you willing to sacrifice to get there? There’s a place for competition in sports for sure. That said, competing at a top level can be lonely and isolating. People often only see athletes at the top of their game, winning medals and posing happily for photos but there’s a crazy amount of work and sacrifices being made behind it all. But competition doesn’t have to be just at the top end; competition is there for anyone who wants it. Whether competing against yourself to get fitter, faster, increase distance or competing against others. Competition doesn’t always have to mean going for gold. It can be about turning up at the start line and completing a race to the best of your ability.

A huge thank you to Elaine for sharing her wisdom and insight into how we can make cycling a more inclusive sport. You can learn more about the IT’S NOT A RACE campaign here.