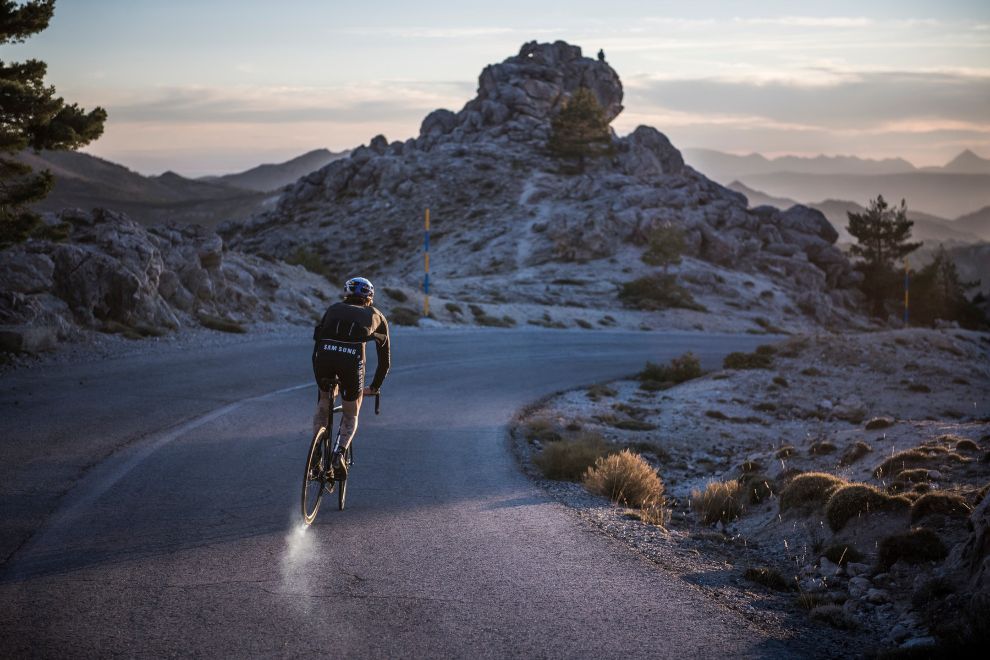 Whenever we talk about tough climbs in cycling, most riders assume we will be talking about Mont Ventoux, Alpe d’Huez or Passo Dello Stelvio. While these climbs are undoubtedly formidable and not anyone can rise to the challenge of conquering them, they are only the hardest climbs that are part of such elite races like Giro d’Italia, Tour de France, and others. The challenge is a bit more extreme when it comes to the most formidable peaks to climb with your bike in Europe. They don’t have the perfect asphalt all the way to the top and if you want to climb them, you will need some proper preparation and the correct gear for the task. So, which are those infamous European peaks? Let’s find out.

Not your traditional setting as you will have the (let’s say) pleasure of riding on volcanic ash. Etna is one of the biggest volcanoes in Europe and is located in Sicily, Italy. Naturally, your trip can be in vain if Etna erupts, which it does quite often recently. However, nothing will be lost if you can just have some pasta and cannoli in Catania.

That’s where your journey will start if the volcano is quiet. You will go along a long asphalt road that will take you up the lava-covered mountain. A stunning view will accompany you along the way. During this part of the ascent, you will have to share the road, which is not a problem at all since all the drivers are friendly and understanding of the hard challenge you’ve taken upon. Right before you reach the lift, you will leave the road and start climbing a mountain path covered in volcanic ash. Needless to say, your typical slick tyres won’t do the trick here, and you will need at least gravel ones.

You will follow this path to the highest point where people are allowed without a guide at 2,950 m. Be sure to make this trip during the late summer months or early autumn since, otherwise, chances are you will have to prepare for snow as well. Well, it’s better to ride on snow than on lava but still. You will ascend a total of 2,740 metres in fewer than 43 km. This experience is not for beginners. With an average gradient of 6.5% and about half a kilometre with 19%, this climb will challenge your physical shape and mental stability.

One of the toughest things in this challenge is getting there with your own bike. You will have to fly your gear and rent a car or ask a friend to take you to the starting point deep inside the Rila mountains. Your journey will start from the small village of Pastra. Make sure you’ve taken everything you will need before you get there since the small village has only one store which works only when the owner feels like it, so don’t be overconfident.

What follows is one truly spectacular climb on what was once a concrete road. Now there are some vague hints that there was something beneath your wheels. This climb is best to be done with an enduro or mountain bike. You will have to ride a constant steep climb with an average gradient of 11.6%. About 2.2 km of the 15.1-km journey are with a 20%+ gradient, so your journey will be long and hard. Finally, there is a part of the road marked as private but usually, the guard lets tourists pass. They only stop cars or other motor vehicles. You will gain 1,704 m of elevation to reach the highest positioned reservoir in Eastern Europe – Kalina. You will have a stunning view of the whole Rila mountain, one of the toughest climbs in the world, accompanied by your back and muscles begging for mercy.

Pico Veleta is widely known as the highest road in Europe. The 31.2-km long bike ride will definitely take a toll on your legs. With an average gradient of 7.6%, you will have to gain 2,383 m of elevation, which will make it fun for you.

The road itself starts at the picturesque town of Guejar Sierra, nestled at the end of the stunning Canales Reservoir. So, naturally, your ascend will be filled with a lot of opportunities for Instagram pictures that will burn Meta’s servers with all the likes they will receive.

The first four kilometres are like a trail. They exceed the 10-15% incline, which is quite a nice way to warm up for the next 27+ km of punishment. If you feel really adventurous, you can try to climb this impossible peak with a road bike. It’s doable but you will regret your decision during the dirt parts. Luckily, there are some places to have a snack and refill your bottles, so there is no need to pack a three-course dinner for this trip.

Still, bailing out on this route is pretty easy, as the toughest part is the first four kilometres. After that, all you need is to have the stamina to endure.

Definitely the most pleasant way to throw up your lungs, massacre your legs, and regret every decision you’ve made in your life so far. Alpe Fuori is located in the northernmost part of Italy where the Alps truly show their magnificence. Almost the entire 11.7-km long ride is through a fairy-tale-like forest, which stops the Italian sun from sucking all your energy. However, over this 11.7 km, you will have to climb 1,588 m with an average gradient of 13.7%. Fun, right?

About 75% of the entire ride is above the 10% gradient, and there is a whole kilometre with 23%. If that sounds terrifying, there are another 500 m with a 26.3% gradient, which many prefer to push through on foot.

Your journey will begin from the small town of Preglia and the asphalt road going up. Soon you will enter a gravel road. So, going there on a road bike is not the best decision you will make in your life. While it is doable, climbing a 20% gradient while your tyres are slipping under you is not as fun as it sounds. The descent with such a bike will be even more horrifying, so a gravel bike is a bare minimum. It’s even better to go on a mountain bike.

Keep in mind that there is no food or water along the ride, so be prepared. However, there is water at the end of the trail, as well as one mesmerizing view. Make sure to visit the nearby lake Lago d’Andromia. When you witness the beauty of the place, all your misery along the way will be well worth it.

This relevantly short climb will be one of the hardest things you will ever do. Over the 7.1-km ride, you will have to gain 1,275 m or elevation. If that doesn’t sound scary, you probably don’t understand the numbers. Scanuppia is the steepest climb (for its distance) in the world. A testament to its terrifying beauty is the fact that the people who successfully managed to climb it in one ride are in the double digits.

The average gradient of 18.4% is anything but your friend. Over 34% of the route are with more than 20% gradient, while it may surpass 30% in some short sections. Your journey will begin from the small town of Besenello, just several kilometres south of Trento and you will ride alongside vineyards before you enter the mountains.

Scanuppia is one of the few climbs on this list that are OK to make with a road bike, although I’d go for mountain bike pedals and avoid the slick tyres. I’d call this a must-do journey but, honestly, this one is only for the mountain goats who seek a real challenge.

Being the hardest climb in Italy does this torture of a ride no justice. Pozza San Glisente is among the top 5 most challenging climbs in the entire world. Recently, the number of people who managed to ride this segment, according to Strava, was in the single digits.

For the 8.8-km ride (which would probably take an entire day), you will have to gain nearly 1,500 m with an average gradient of 16%. This is not a pleasurable journey, and whoever tells you this is a relaxing ride is either lying or has no idea where they are going. Only 12% of the ride is under a 10% gradient while about a third of the distance, you will have to struggle through a 20%+ gradient.

The majority of the road is paved but extremely narrow. Thankfully, rarely any cars take this insane road but do be careful at tight turns. I can’t stress enough how narrow this road is, so just like the cars going through it are extremely careful, so should you.

About a quarter of the way is on what essentially is a paved third-class road, while the very last segment is literally a giant rock and dirt. This being said, the ride is pretty road bike-friendly, although I’d highly suggest using a gravel bike at least. This journey is one where you should be prepared. There is absolutely nothing along the way, so you need to pack your own food and water.

If you ever manage to lift your head from the wheel in front in an effort not to throw up your lungs, you will witness the magnificent forests along the way. At the top, after you take half an hour or so to catch your breath, be sure to spend some time enjoying the scenery. I’m sure you will never try this climb again, so don’t waste the opportunity to take a few pictures.

If you have ever wondered how to get off biking, this is one sure way. Llano de las Animas is among the top 3 hardest climbs in the world and the most challenging one in Europe. Well, OK, it’s technically in Africa since it’s on the Canary Islands but it’s still Spain, so it counts.

Situated on La Palma island, which recently became widely known for the massive volcanic eruption, this route is probably one you should skip at the moment until the lava-bursting mountain calms down.

Your journey will begin at Puerto de Puntagorda on the western shore of the island. The toughest part is that your entire journey will be under the scorching sun, and you literally have nowhere to hide. During your 15.6-km tour, you will pass several villages but you can only count on Pino de la Virgen at the halfway point for a meal and water. There is literally nowhere else to go.

During the 15.6-km ride, you will have to climb roughly 2,000 m with an average gradient of 12.6%. Don’t be fooled, though. The average is brought down by the relatively flat start, where you will only go through a 3-5% gradient for about 2-3 km. After that, you will have to struggle through soul-crushing climbs as 15% of the entire route is with more than a 20% gradient. The road itself is actually one of the best on this list. For about 12.8 km, it’s a two-lane asphalt road with no axis line. The last 2.8 km are made of grooved concrete, which gives outstanding traction on the ascent but is God-awful on the ride down.

Once you reach the top, you will hate everything in the world and curse whoever told you about this challenge (which might be me, so don’t be too harsh). Nonetheless, after you catch your breath in front of you, there will be such a view no camera, photo or even words can describe. You simply need to see it.

All of the climbs on this list are only for experienced riders. If you haven’t conquered child’s play climbs like those on Tour de France, don’t bother going for these. When I say they are the hardest thing you will ever do, I’m not kidding. So, if you wonder how to spend one painful but fulfilling vacation, take your pick, bike, and gear and let’s go.