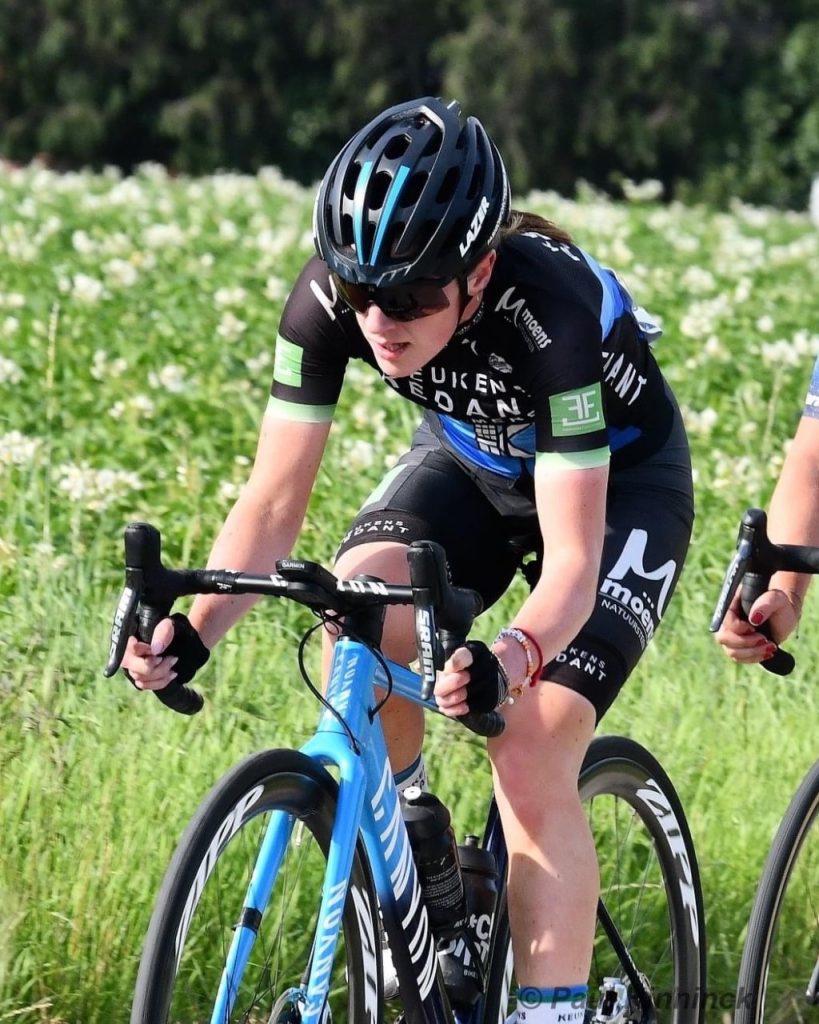 “I always had imposter syndrome, because I came to cycling so late. You set a limitation in your mind – but once you get past that… even last weekend in London, people were introducing me saying, ‘This is Imogen, she’s Irish national champion.’ And I’d think ‘Oh my God – I am! That’s me!’”

When WeLoveCycling last checked in with Imogen Cotter, the Irish National Championships were just four weeks away – and, somehow, they didn’t come up in conversation. It made it all the more incredible, then, that the Clare-born cyclist claimed the Women’s Elite Road Race crown in October, realising a dream and cementing her place at the top table of riders in Ireland today. From her home (for now!) in Ruan, she reflects on an astonishing race and a life-changing few months – and, first, the art of keeping a secret… 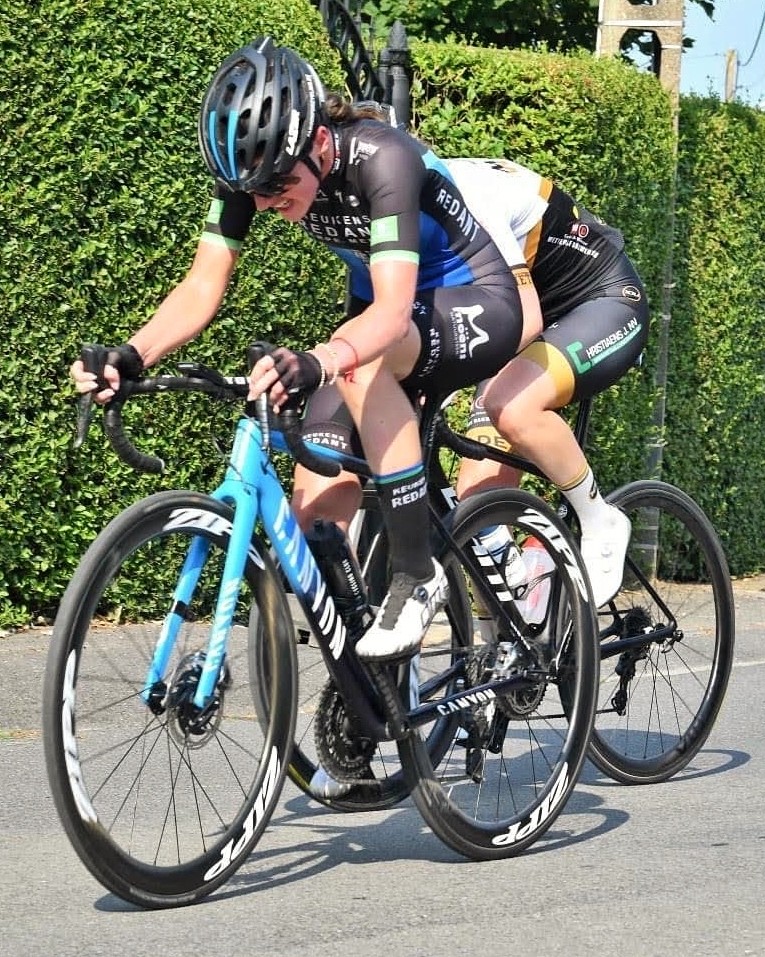 So, were you quietly plotting a National Championship win without telling anybody?
Haha! I would have written it down, it was on my vision board, and it was something that I’d have said to my nearest and dearest – but it was something I was afraid to say out loud. I do believe in speaking things into existence, but you don’t need to do it with everybody! You feel vulnerable if you tell everyone about every goal. It was something I wanted so badly, but it just felt like it was maybe out of reach.

You’ve said that things only came together in the six-to-eight weeks before the race. Take us back to before the change…
I’d had a bad start to my year; I wasn’t in a great headspace, and I was really struggling with being in Belgium, so far from home. They always say, ‘Happy head, happy legs’ – and I felt the opposite of that. For a lot of the racing at the beginning of the year, we were lumped in with World Tour professional riders. I felt out of my depth; I was trying to compete with these pros and getting my ass handed to me. The longer it went on, the more down I got on myself – almost like a learned behaviour. I’d go to the back of the peloton, where it’s all the harder. I just felt a bit lost.

It came to a head at the end of June, in a stage race in Belgium. I’d had a few good races and a few bad ones, but I wasn’t feeling confident. On the first day, the first 30km, I was gone; I dropped off the back, and went the last 100km on my own – the cars had passed up the road and everything. I wasn’t allowed to start the next day, and I asked myself, ‘What am I doing?’ I’m 28 years of age, people around me are saving for a house, or progressing in their careers, and what was I doing? Should I keep going? I really felt like it was my last couple of months, and I needed to figure out what I was going to do.

At which point you found an answer?
The day after that, I went to get a coffee, sitting on my own, knowing I should have been racing that day. I found this article by a sports psychologist about riding with fear; I reached out, and asked if she had other material I could read. She sent on her book – On Top Of Your Game, by Carrie Cheadle – and I downloaded it on my Kindle. It felt like she had written it for me. I sat there reading it, crying, and from that moment everything changed.

I started going to see a sports psychologist, Anne-Marie Kennedy. I’d spend maybe an hour a day envisioning myself as a good athlete, instead of sitting at the back of the peloton. I also made the decision that I needed to move on from my coach, and find someone to give me the attention I needed. And also, in August, I went home to my family – when we last spoke, in fact. The sports psychologist, the new coach, being at home with family – I changed completely as an athlete in that month. It all came together, all started to click.

So there was a quiet confidence before the Nationals?
If you were at home here, there was loud confidence. ‘Let’s get this jersey, let’s bring this home!’ This is how I’ve been for the past couple of months, just saying everything out loud, and every day. ‘My life is about to change!’ I could see it written: Imogen Cotter, National Champion. Oh, and I felt crap; I’d just done a 350km gravel race in Girona, and I only had a week to recover. The first 50km of the National Championships was tough…

Not the ideal prep, then! So, talk us through the race…
I’m used to setting and keeping a hard tempo, but one of the girls was surging and coming back; that was wrecking my legs. But I know I’m a good climber; if I’m suffering, then everyone else is suffering as well! The day before, one of the guys told me how I should approach the race – and on the last climb I put my head down and went for it. I knew I couldn’t bring a lot of the girls to the line; I was going to have to lose some people. On the descent, I had a gap – a small one – but I thought to myself, ‘Now I have it’. The adrenaline you get when you say something like that, it gives you the extra kick you need. My senses were tingling; my whole body was ready to sprint.

Which isn’t the norm?
I hate sprinting! I hate sprinting, but I’d been going…eh, not well, but every race that I’d done since changing coaches I’d been doing intervals and setting a PB on my power. The day before the race, I did an interval on the course, on the finish, and I set a PB. I saw myself winning it then, and so when I was coming to the line on the day I had it in my mind already.

Crossing that line, I’ll never ever forget it. It was an incredible feeling. It was like the road opened up, as though it was a dream; it lit up, and all of a sudden it was like I was transported. I went back the next day to watch the junior women, and thought, ‘Hang on, is this even the same road?’ In my mind it was a dual carriageway with spotlights, not a normal road in Wicklow!

And it seems fair to say that it’s changed everything for you…
The week after, I was just getting up and looking at the jersey hanging across from my bed. I think it’s transformed me as an athlete, in terms of my self-belief; I don’t put limitations on myself anymore. It’s given me so much confidence, to be able to accept that I’m a good athlete and a good cyclist. I think people believed it for me, but now I feel it myself.

It’s brought so much opportunity already; I’ve been able to go to local primary schools, to chat with kids and encourage them to get on their bikes. Even at that bike show in London, now I have something to show, to prove that I’m a good cyclist. I’m going up to a UCI team, Plantar-Pura, so I’ll get to do all of the Classics and race all over Europe. I’ll have a DS, and a really professional setup… and a contract. Like, I feel like the past few years everyone’s said, ‘Imogen is a professional cyclist,’ but I wasn’t – this is the first year where I have a contract that is paid.

And the road is calling once again?
I got home from London, and my friend had messaged to say one of the girls might be moving out of their apartment in Majorca; I booked flights 20 minutes later! It’s funny, because it’s coming full circle; it’s the same apartment I lived in when I started cycling in 2018. Back then, it was high pressure and not that much fun; all track-track-track, and hard to enjoy. I was constantly competing with these friends that are so dear to me, but trying to take their spots on a team because there were only four spaces. I can’t wait to go back there, surrounded by athletes who are so motivating for me, and I’ll be there in a totally different place as a more mature athlete.