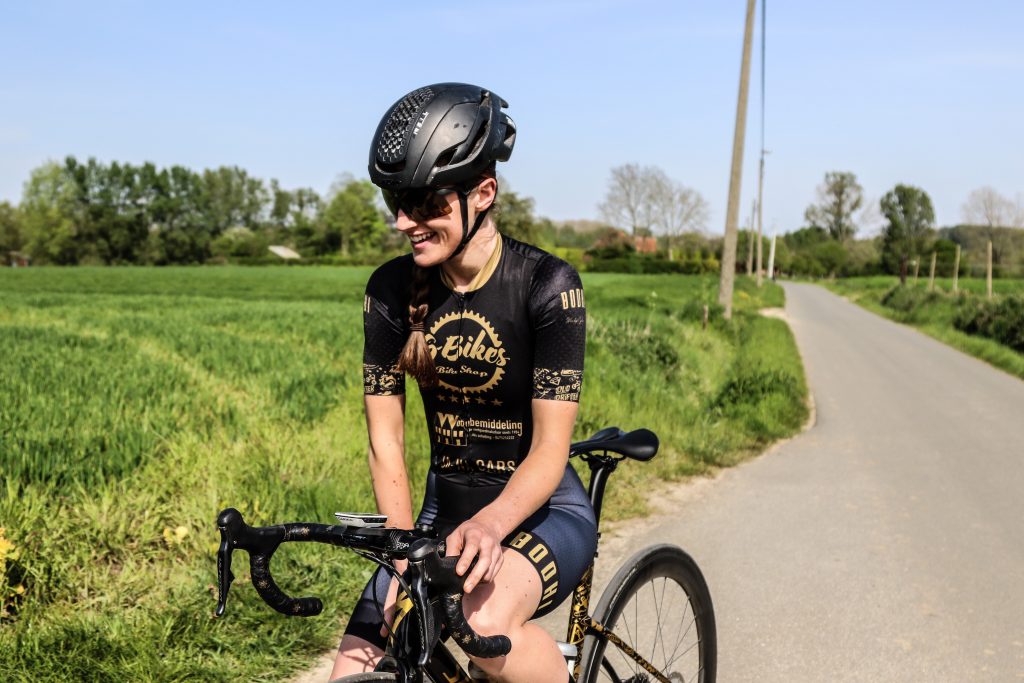 25-year- old Imogen Cotter first started to cycle simply as a means of getting from A to B in her rural upbringings, but she has fast become a skilled and regular competitor.

She works full time and races weekly in her new home of Belgium, with S-Bikes Bodhi Cycling club, using each and every competition as a learning experience.

We chat to the woman herself about how it all began, barriers for female cyclists, exciting new chapters, and growing in confidence

I always cycled a bit growing up. I lived in the middle of nowhere and I was sick of asking my parents to drive me everywhere, so I started to cycle instead. I was originally a runner, so I used to cycle to training. I caught the triathlon bug after a while, and did that for about a year, before focusing on running again. In 2017, my mum tagged me in a post on Facebook; Cycling Ireland were looking for talented athletes in their sport to do a ‘talent transfer’ program. I was living in London at the time, so I booked a quick trip home and did the testing. Out of the nearly 100 girls tested, I made it to the final eight and eventually the final four! We focused on track cycling, the team pursuit in particular.

When did you decide that you wanted to pursue it more seriously, and what was it that sparked this decision?

There was a time when I was living in London, and travelling to Mallorca every month or so to train with Cycling Ireland on the track there. We made the decision as a team to move out to Mallorca in February 2018 and I stayed there, training full- time, until September 2018. In this time, I became a much better athlete, not just physically. It taught me a lot about myself and my capabilities. Moving to Belgium has really brought my determination to another level, as I am able to compete against professional cyclists every weekend. It is a dream come true.

Do you think there are any barriers for women in terms of cycling competitively?

I think that times have changed so much. I have only been cycling for two years, but in this time I have seen so many women giving cycling a shot. There are so many influential females out there, showing that it is possible. I think it is a lot more accessible now for women to begin cycling – there are so many clubs and training groups for women at home in Ireland. Taking the jump to competition is a big one, and it is quite daunting. I think as long as you are enjoying it, that’s the main thing – you shouldn’t feel pressure to compete.

From a leisurely point of view, Ireland is beautiful of course, but in terms of professional racing, we’ve hosted massive tournaments/ routes in the Tour De France/ Giro D’Italia etc, do you think this is something that should be encouraged here more or do you think Irish cycling routes are well equipped enough to host such prestigious events?

I think it would be great to see more of this! There is such a great cycling culture in Ireland, and we have produced some cycling legends (everyone here in Belgium says ‘Seán Kelly’ as soon as I mention I’m from Ireland!). There have been some brilliant events that get so many people interested in cycling – things like the Tour de Burren – that aren’t necessarily for pros, but really help to promote the sport.

You’re currently in Belgium for your first season of cycling – what are your goals?

Well, seeing as it is my first road season, my main aim is to learn. I race here at least once a week, and I can see my skill level improving so quickly. My fear of the bunch is dissipating and I’m getting a bit more confident in my ability to attack or ride at the front of the bunch. Seeing the same women at races each week, you get to know people and everyone has been so helpful. I have had so much advice and help from my team mates and from other ladies in the peloton. It’s such a nice atmosphere. So, my aim is to learn this season, and next season I can start to get a bit more competitive.

Do you think more needs to be done to encourage women to consider cycling as a competitive sport?

I think things like the Cycling Ireland talent transfer initiative are brilliant. I would never have been cycling at this level if it wasn’t for that. The fact that there are more female cycling ‘influencers’ nowadays is huge. I remember when I first started cycling, I just followed a load of cyclists and learned so much from their posts. If you can see other women doing it, it inspires you to give it a shot yourself.

You can’t talk about cycling as a competitive sport without mentioning the cost that comes with it, but don’t be afraid to go out on whatever bike you have. When I was first racing, it was on a very basic €500 Planet X. Then I borrowed my dad’s old Boardman, and finally I got to use his Pinarello. It doesn’t have to be perfect – you just have to start somewhere!

If you could change one thing about cycling in Ireland – what would it be?

A huge thing that I have noticed since moving to Belgium is all of the cycle paths. It is a really safe place to cycle, there are paths literally everywhere. If these paths became more widespread in Ireland, I think it would encourage a lot of people to get out there.