Ten years ago, Pavel Kovar had a tragic accident that left him in a wheelchair. These days he is preparing for the Para-Cycling Track World Championship in Italy. We had a chat about dealing with sudden body paralysis, struggling with rehabilitation and rebuilding an active life.

Yes. In August 2009 I took a header into the water and hit the bed of the lake with my head. I was paralyzed right on the spot, and if it hadn’t been for my friend, I would have drowned. Waiting for a helicopter, I realized I couldn’t move at all and I would no longer be able to do what I love most: playing basketball. In the hospital they had to operate on me for an injured vertebra in my neck – a fragment of it pressed against my spinal cord. After two days of induced coma I woke up and began to realize what had happened.

How long did the rehabilitation take?

The rehabilitation starts almost straight away after the injury. Doctors say the first two years are crucial. It’s when the patient makes the biggest progress. My diagnosis was against me: my fifth vertebra was injured (the closer to the brain the injury, the more extensive the paralysis). In practice it means that you will either become a bed-ridden patient or maybe you will be able to move your shoulders. The doctors implied my case would be a bed-ridden patient. 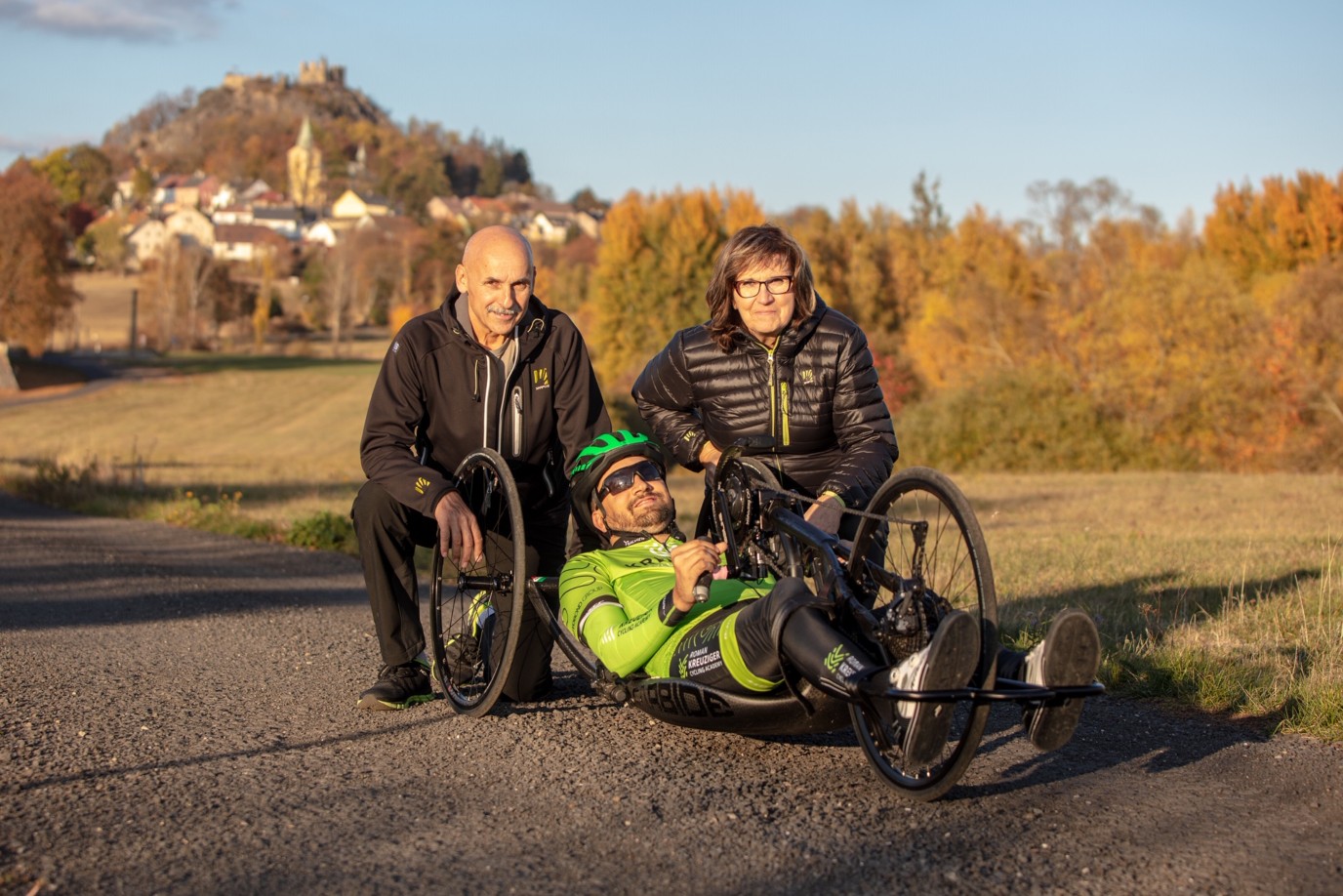 That was the moment when I realized that even before, when I had been playing a losing basketball match, I had never given up and always believed in a turn for the better. So, three days after the injury my hard struggle with rehabilitation and my mission to change the prognosis started.

The first round of rehabilitation at a spinal injury ward took two months. Then I was transferred to a specialized department where I stayed six months. Since then I have been rehabilitating as an outpatient – it’s been over nine years and I still have to rehabilitate.

When were you able to come back to sports, then?

I wanted to come back to sports right away, but that wasn’t possible: I was too weak, and the first couple of weeks it was a huge success when I was able to sit for a longer period of time. After some time, I managed to partially move my hands and the top of my back. Unfortunately, there are not many sports activities for people with my disability – my fingers don’t work, so I cannot grasp anything tightly. What’s more, I keep having troubles with stability (I cannot keep my posture), it’s a constant struggle not to fall down.

So why did you end up hand biking?

When I was looking for a new sport, it was quite straightforward. I wanted to make my body sweat as it used to when I was playing basketball. There were two options: riding a hand bike or playing quad rugby. I’m not really a fan of aggressive games and I like nature, so the choice was obvious. 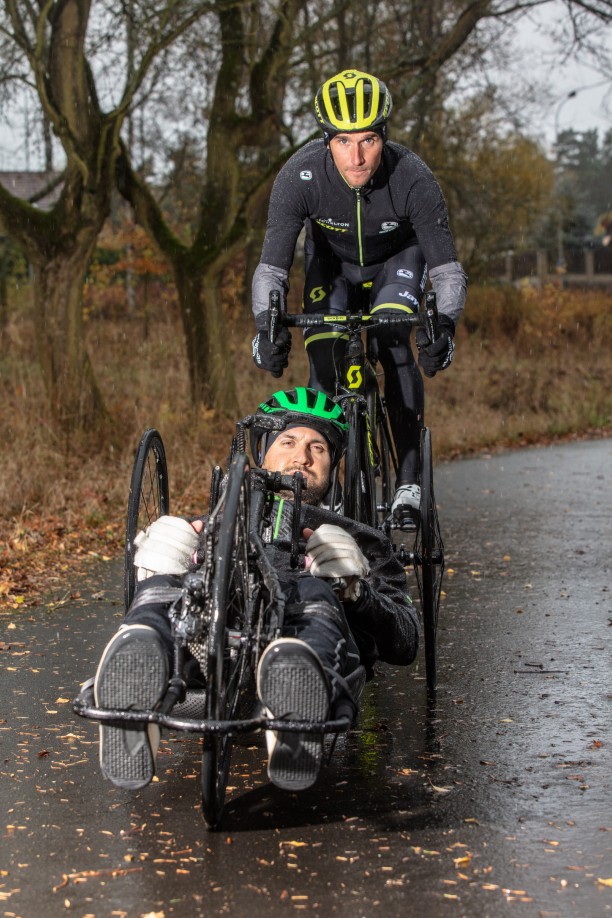 There were two other things that helped me make the decision: my friend is a cycling fanatic and he put together his own team. Also, my brother-in-law is Richard Kreuziger, a World Tour professional rider. I loved the buzz around races and wanted to experience it myself.

Did you consider racing right from the start?

I got my hand bike four years ago. After a year of riding in my free time, I plucked up the courage to register for the Czech Cup where I learnt how hard it actually is. So, in my first “racing year” I just rode two races and was never sure if I would ever get to see the finishing line. In my second year I tried to ride four races and even one race of the European Cup. I won the Czech Cup in my disability category. Now I am at the beginning of my fourth season. As I’ve been really putting a lot of effort into it, I want to try the World Cup races and qualify for the World Championship.

As I ride hand bike, I focus on strengthening my arms, shoulders and the top of my back. It’s been over a year since I decided to train in a professional manner with the goal of making it to the World Cup. Recently I transferred to Roman Kreuziger Cycling Academy team where they help me with preparations. If everything goes as I wish, I would like to qualify for Paralympics. So it’s not just riding the hand bike, it’s training for a specific goal. I made a big progress over the year. I go to the gym, ride the bike, do physiotherapy and swim. I ride more during the season. In the winter season (October – April) there’s less riding and more gym, swimming and physio. I think my regime is quite tough, but if I want to catch up with my rivals, it’s the way it has to be. 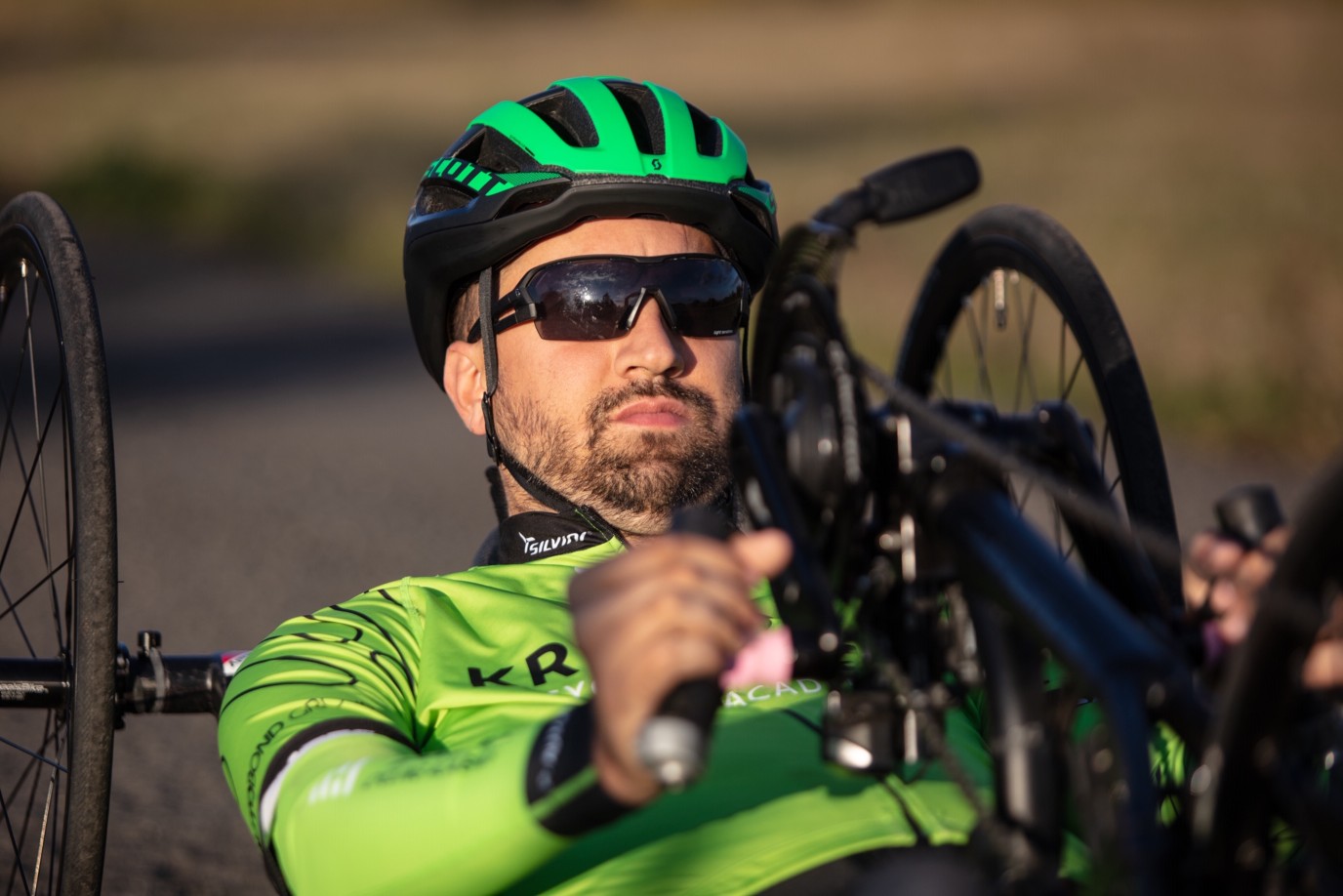 So what do you have to accomplish to qualify?

It means hard training and raising enough funds to train professionally. I created a photo calendar and want to use the profit for the preparations for this season. Thanks to a public fundraiser, I was able to get a race carbon hand bike last year. The price of these bikes is as high as the price of racing bikes for healthy cyclists. If I manage to find sponsors, I will get a bigger car to stuff all the gear in and travel to the World Cup with a companion.

What’s ahead of you this season?

The first race of this season takes place in April, and then there’s my first trial of the World Cup in Italy. I mean, I’ve been training for more than a year, so I want to pit my strength against racers on a higher level. But I would also love to enjoy the atmosphere. I want to set my goals high, but also feel good about myself. I want to make sure that I did everything I could to enjoy it without embarrassing myself, the Academy or the Czech Republic.